Paul James Gomes is an independent producer and director based in Edinburgh, Scotland. With a background in documentary filmmaking, Gomes recently expanded his practice to include video art. Having moved from Bangladesh to the UK, the main focus of his current work is migration and the understanding of home. On the occasion of his residency at the British School at Rome, the artist created two video installations: Prego Selfie (2015) and Roma Sub Rosa (2015) that explore the simultaneous visibility and invisibility of the large community of Bangladeshi immigrants present in the streets of Rome. 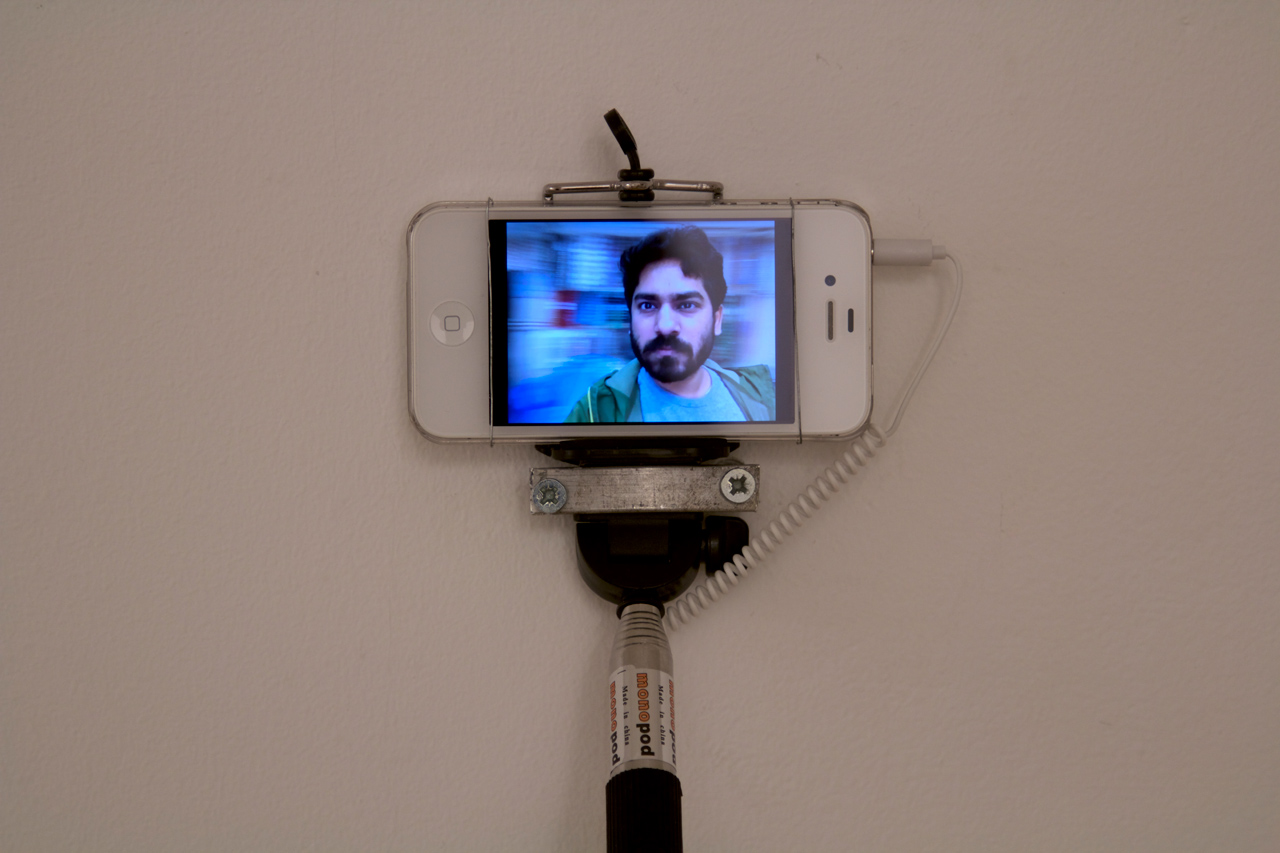 Can you tell us about your residency at the British School at Rome?

I knew it was an opportunity for me to rethink my work, as I am now concentrating on my creative projects rather than my work as a television documentary maker. The residency allowed me to experiment with video art, giving me the chance to work with video in new ways.

Could you briefly describe March Mostra – the final group show by Fine Art award-holders at the BSR?

For me March Mostra has been a great learning experience. This was the first time I have taken part in a group exhibition, and  a lot of it was learning how to place each others’ work in the gallery space and the (aesthetic) negotiations it involves. I had to re-plan the projection size of my video on the wall, as we couldn’t put the projector close enough to make the image size any smaller. Given these circumstances, I decided to make one big continuous projection using two projectors, and I think this actually worked better in the end. The videos spoke to each other, this way the rose-seller became part of Rome in my view. One of the highlights of the show for me was to be able to work alongside the artist Georges Audet (Canadian resident from Quebec). We had great discussions about our mutual work and this influenced a lot how my project was eventually presented. He is brilliant at using what a specific space has to offer and I really learned a lot from him in the March Mostra experience. 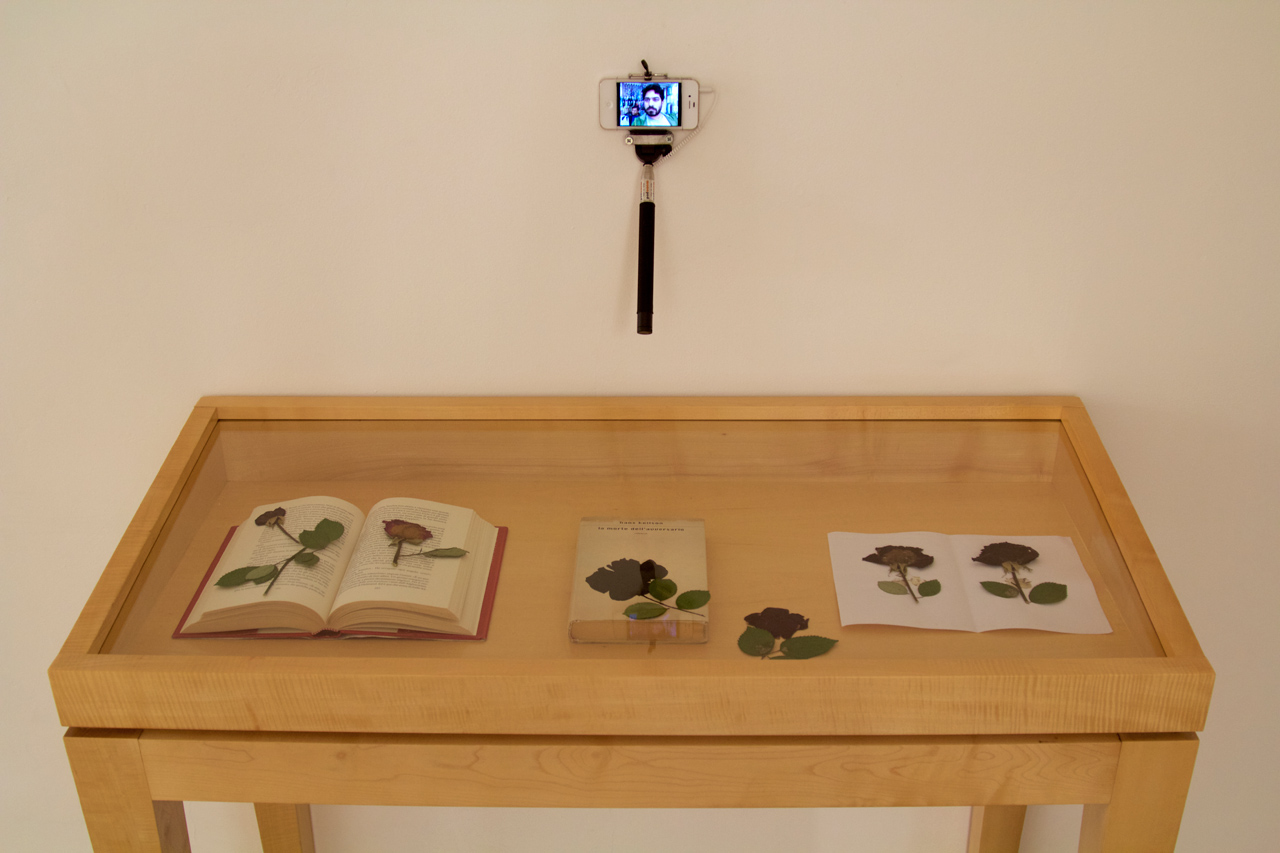 The work you presented on this occasion pivots around the stories of Bangladeshi migrants in Rome, selling roses and selfie sticks on the streets. With their presence being somehow liquid and nomadic, they pop up on crowded spots and touristic routes, while we fail to seize their life as a community. Would you tell us more about the starting point of the project and how did you develop it?

I came to Rome in 2013 just as a tourist. I was surprised to see so many Bangladeshi fellow in the streets of Rome. I could navigate the whole city just using my native tongue Bengali. It was weird and adventurous. Apart from in London, I have not came across so many Bangladeshis in any European city. I knew then that I wanted to make a film here. So, when I saw the advert for the Creative Scotland Document 24 Fellowship to spend three months at the British School at Rome and make a film, I thought this was the opportunity.

When I started doing more research, over and over again the point of view that I came across was one of looking down at these immigrants. It was as if they are the pest of Rome: tourists are warned and taught how to deal with these miscreants. Mostly the Bangladeshis in Rome are represented as ‘the other’, and not as part of the city. But I wanted to see them as an integral part of Rome, the city as it is now. For me they are as much Roman as anybody else living here. What I wanted to achieve was to produce a contemporary portrayal of Rome. I wanted to make audiences realise that these immigrants are an integral part of the Capital, they are no more separated from the city than the audience themselves. If immigration is seen as a problem, this problem does not exist separated from us; we are part of it and we take equal part in creating it. Moreover, this project was also an opportunity for me to understand myself as an immigrant, placing myself as part of the story. I was very consciously aware that I was not telling a story about them, “the immigrants”, but rather about me, the immigrant.

While working with the selfie stick sellers in Piazza del Popolo, it was very hard to get access to record the actual selling. No one wanted to be portrayed as selfie stick seller because they feared my footage would be telecasted back in Bangladesh. Mostly, the families back home don’t know what kind of job they are doing here. They were worried that if I would film them, their families would find out what they are really doing in Europe. And they themselves had little idea that they would end up selling selfies in Rome – talking about the perception of ourselves and selfie sticks! So instead, I started selling selfie sticks alongside them, while my Creative Scotland Document fellow David was filming me. I tried for hours and did not manage to sell even one selfie stick. What was most interesting to me was that once I started selling the selfie sticks, no one wanted to make eye contact with me anymore. Everyone overlooks your existence, you become invisible right in the middle of the city. This was the beginning of the idea behind the second video project Prego Selfie, to make a selfie stick seller visible. 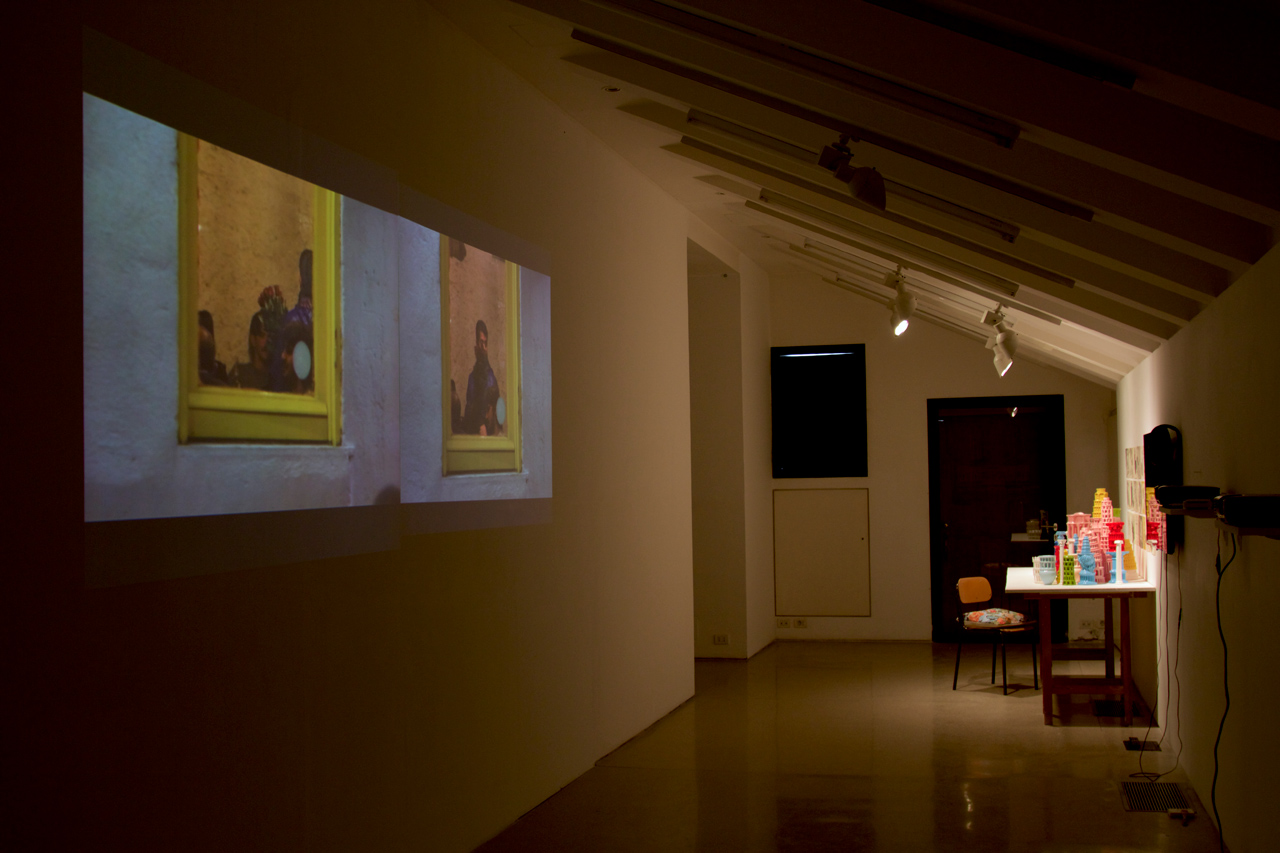 Your education as a professional filmmaker and photographer influences your artistic practice, especially in the use of video as an investigation and discovery tool. In this latest work of yours, some references to Neorealist cinematography — as De Sica’s iconic movie, Ladri di biciclette — can be clearly traced. Would you like to expand on your artistic background and your main sources of inspiration?

Growing up in Dhaka I came to know Rome through De Sica’s movie Ladri di biciclette. In the late 1990s the only way we could see international art cinema in Dhaka was through the film societies. I was a member of the Zahir Raihan film society (named after a prominent Bangladeshi film director) and they used to show lots of Italian neorealist films. The Rome I knew was from the late 1940s, so obviously I was shocked when I came here in 2013 to find Rome full of Bangladeshis.

The Italian neorealist films had a great influence on Bangladeshi art cinema and in general on South Asian art cinema. Filmmaker Satyajit Ray felt very inspired after watching Ladri di biciclette and realised that it was possible to make a film with amateur artists and filming on location. He directed Pather Panchali (1955), which trigged an art cinema tradition in Bengal thereafter. To me Ladri di biciclette is very much about the Roman underclass. It is about people at the bottom of society and their struggle to maintain a life of dignity, which is not always easy. I wanted to do something similar, I wanted to see Antonio Ricci – the protagonist of Ladri di biciclette – in all the rose-sellers and selfie stick sellers of Rome. I wanted to show a glimpse of how life is for Ricci now.

After coming here, I had the opportunity to see Pasolini’s Accattone. I went to Matera, where he filmed his beautiful II Vangelo secondo Matteo. It was a joy to discover him. I do not know how he might have influenced me creating Roma Sub Rosa, but I believe he has appeared in it. If you look carefully, after the rose-seller leaves from the window of the restaurant Betto e Mary, Pasolini is sitting on one of the chairs. This was confirmed by two members of the audience during the exhibition. They came to me and asked isn’t that Pier Paolo Pasolini? I think it is! 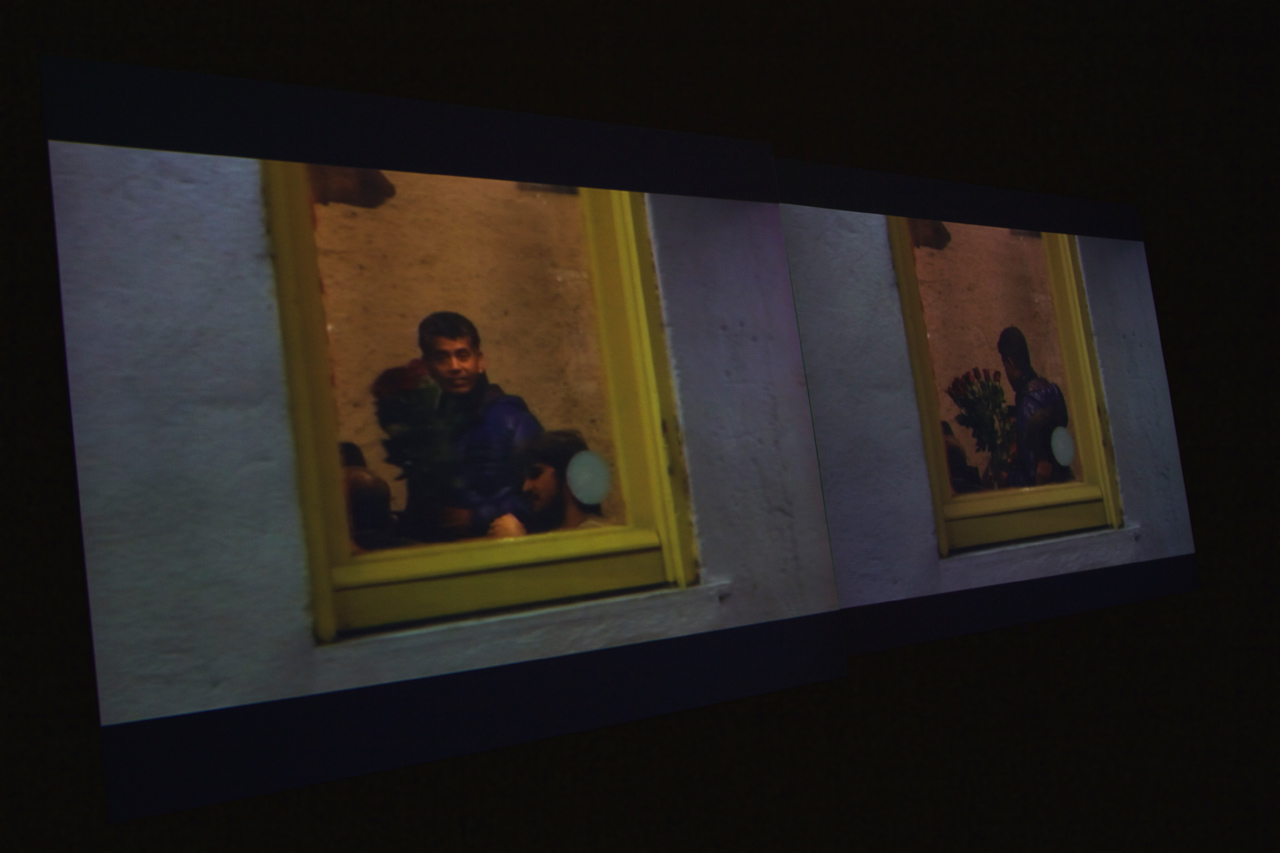 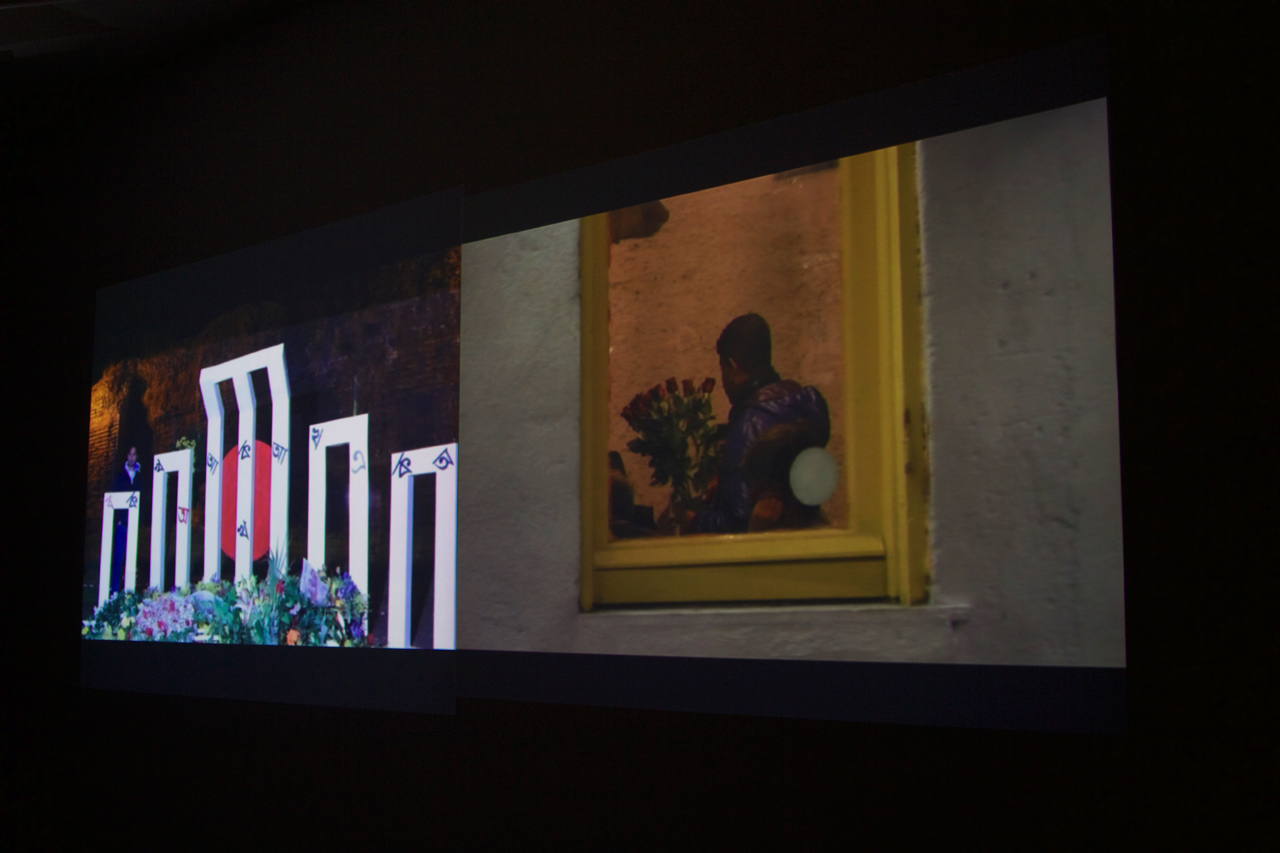 Your research has been dealing with the consideration of migration flows, displacement and the multi-faceted understanding of the concept of home. Since you are facing a very debatable topic, is there a particular message you would like to convey? What would you like the audience to mainly take from your work?

During my show at the BSR, one member of the audience came to me horrified and asked: “But where do all these immigrants come from?” For a while, I didn’t know what to tell her. We only see things as we want to perceive them. I see immigration as an imagined problem that satisfies our unresolved question of why everything is not perfect: why does the system not work? Why are we unhappy about the world the way it is? Migration is just one of the many fetishes that can be used to fulfill a fantasy scenario: if only there were no migrants, everything would be perfect. We also fail to see how we ourself are part of these systems that produces the flux of migration. And we want answers not to solve anything, but to satisfy our righteous position. Like I do ;-).