“Soon after my arrival in the hovel I discovered some papers in the pocket of the dress which I had taken from your laboratory. […] It was your journal of the four months that preceded my creation. You minutely described in these papers every step you took in the progress of your work; this history was mingled with accounts of domestic occurrences. You doubtless recollect these papers. […] the whole detail of that series of disgusting circumstances which produced it is set in view; the minutest description of my odious and loathsome person is given, in language which painted your own horrors and rendered mine indelible. […]`Accursed creator! Why did you form a monster so hideous that even YOU turned from me in disgust? God, in pity, made man beautiful and alluring, after his own image; but my form is a filthy type of yours, more horrid even from the very resemblance. Satan had his companions, fellow devils, to admire and encourage him, but I am solitary and abhorred.” – from Mary Shelley’s Frankenstein or, The Modern Prometheus, 1818 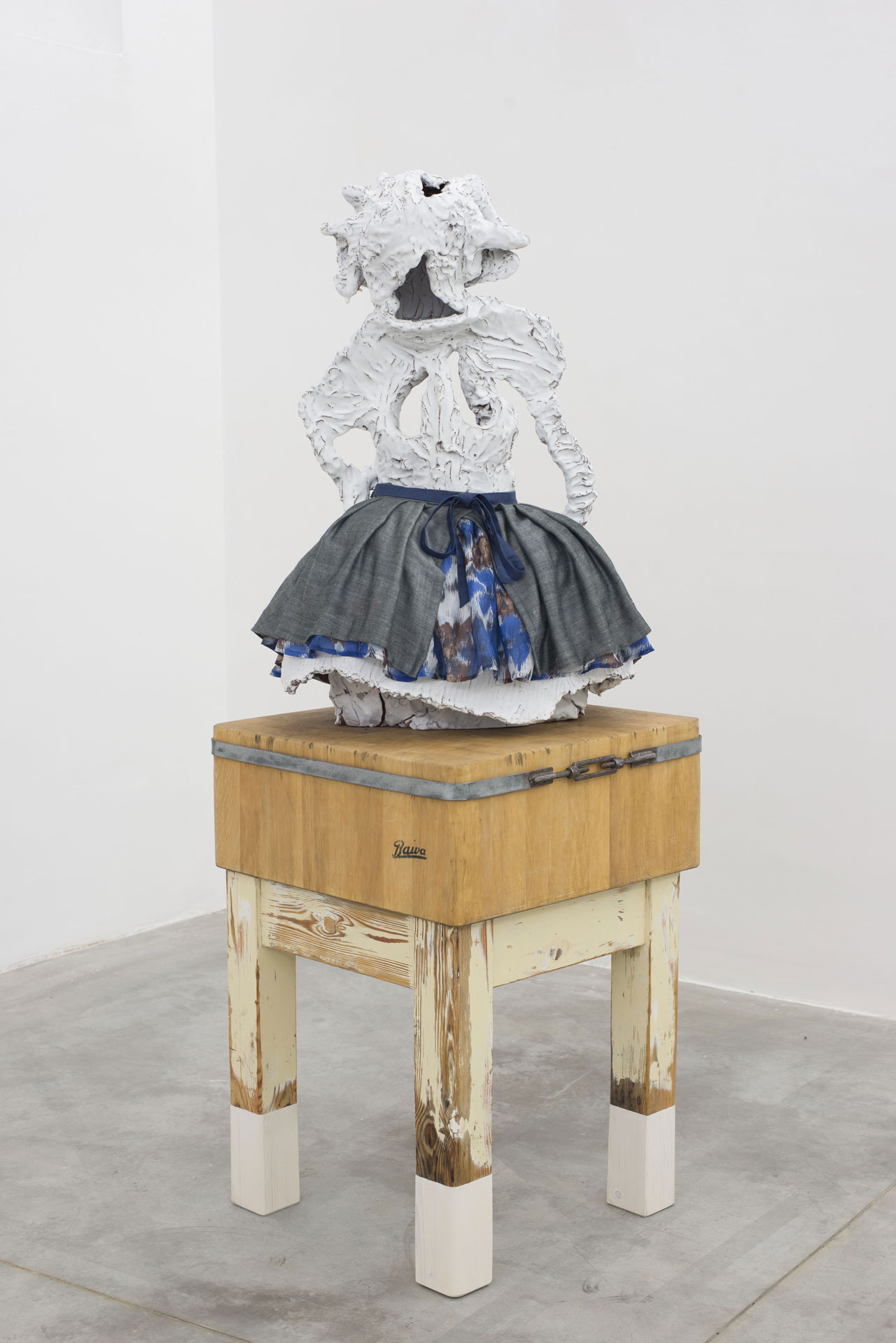 The works in the exhibition “Gentlemen” seem to abstractly illustrate narratives coming from literature or TV series. What is it in the world that mostly influences your work (music, horror movies, religion, books, economics, mass media,etc), and how does this shape it?

Hi there, I do not attempt to abstractly illustrate narratives from literature or TV series even though the titles are often taken from these or other sources, I feel this is quite important. The titles do not describe what the painting depicts, or explain what the painting ‘is about’. So what is the function of the titles you might ask… this is quite difficult to explain because I use the them in different ways: sometimes they work as a self-deprecating remark coming from the painting or the figure in the painting – a bit like an actor saying a line; sometimes it’s a remark from me about the process of making the painting, often an expression of disappointment in the finished painting or a comment on the process of making the painting. Sometimes the title conveys an atmosphere that it shares with the painting, a bit like in films or often in TV series in the end of the episode when the director/ creator picks a song that might not have anything to do directly with the theme or conflict in the episode – but it conveys the same atmosphere.

Also, often the titles are decided upon/ found after the painting is finished – I work very hard to find a title that fits with the painting/ work and, in that respect, the title becomes part of the painting, even though it’s ‘borrowed’ from other sources. For me ‘adding’ the title to the work is as important as ‘adding’ a colour or brush mark.

The titles you mention from Mary Shelley in the current show are taken from Frankenstein which I think is one of the best books ever written about creating (and also about parenting, but that’s a different story).  As you know, Frankenstein was very disappointed with his creation but he also did a quite bad job, didn’t he? He didn’t finish it, he lost interest, he had no respect for his creation… The ceramic heads on the boards I did a while ago and they were actually shown on their own in a museum a couple of years ago, but they haunted me. I never gave them the attention they deserved, so I decided that I wanted to go back to them and give them the attention and work they needed. That’s one of the reasons why I used the quotes from Shelley. The other reason is that these distorted figures of course resemble masks or monsters, or distorted human facial features which they share with the idea of the monster as disfigured; but they also reference the severe distortion in facial features as well as the expressions a mentally ill person can display/ experience, I have been inspired by Messerschmidt’s heads.

I probably have a core in my practice, something you could call ‘concerns’ and, around that, is a very fluid porous membrane, or substrata, or a kind of field that absorbs whatever external stimulus I experience, and through this open flexible membrane everything just passes through, which sometimes can be quite exhausting and often I have to protect myself from certain kind of stimuli. Then the core seems to digest the stimulus and then, somehow, it is suddenly spat out back into the world through the work and often it’s only later that I realize where the stuff came from. I can always go back and find the origin but it takes some digging around since all the stimuli have been mushed up and turned into this new thing which is the work. 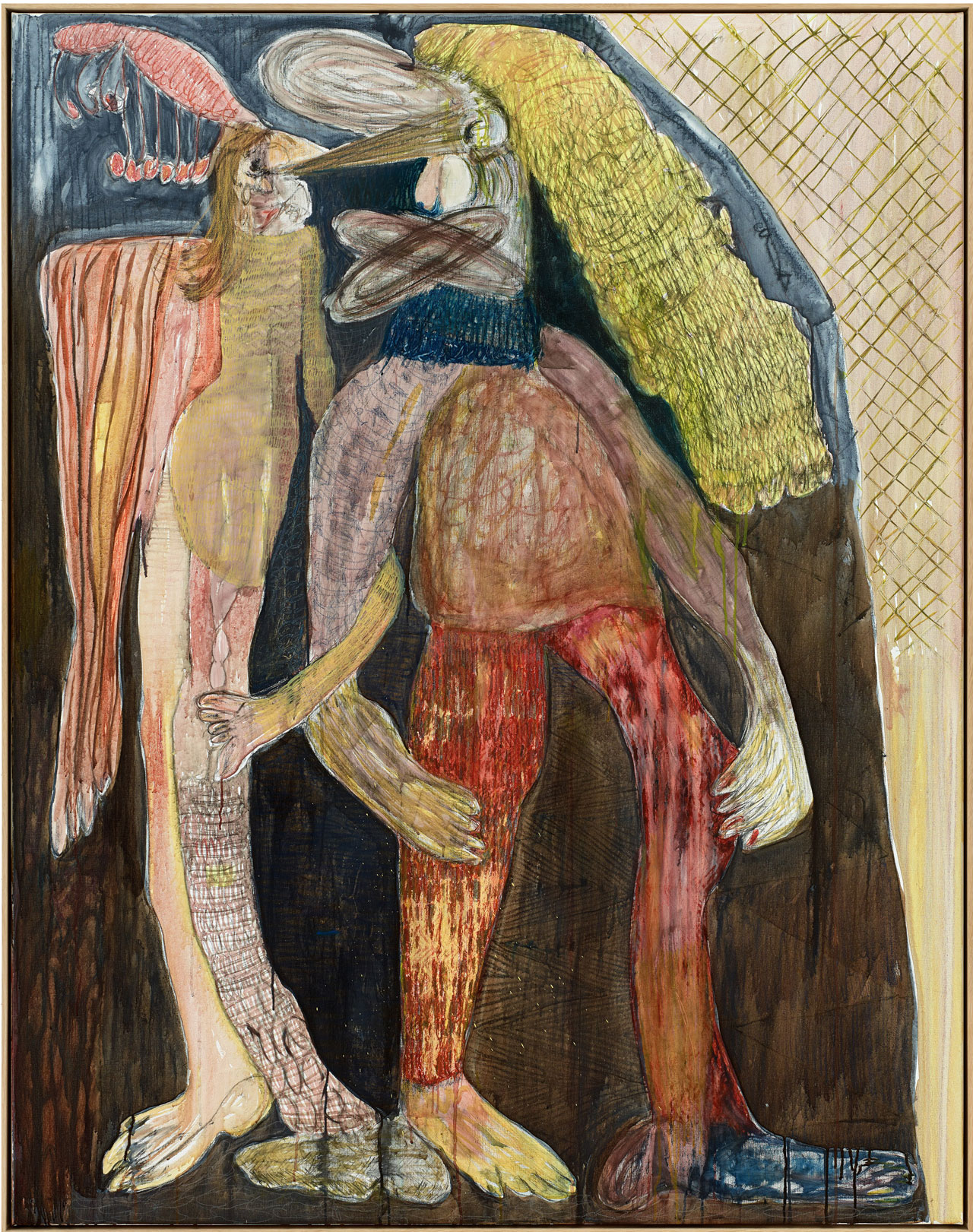 Your untamed approach to matter and composition — both in painting and sculpture — seems to bear a reminiscence of the movements from the first half of the XX century, as German Expressionism of French Fauves. Has your practice been somehow influenced by the work of an artist or an artistic group? Which ones?

Influences, artist and artist groups… yes, I have been very influenced by many artists and artist groups, but none in particular. As for painting, I can mention the usual list of suspects, plus Danish/ Nordic/ Scandinavian connections so to speak such as Cobra, Munch, etc.. About sculpture, I am not sure as I was not much interested in sculpture or clay before I started working with it, but Gauguin did some very nice ceramics.

I really liked the sculptures that Enrico David made recently, but I only saw images of them. Other references are the art of mentally ills and Art Brut. And Rouault. I am really not very up-to-date about the young contemporary art scene, I rarely have time to go out and see shows about young contemporary art. I did see a show a while back at Bortolozzi gallery here in Berlin with Betty Woodman, that was very good I thought, but then again, she is not really a young artist, is she? 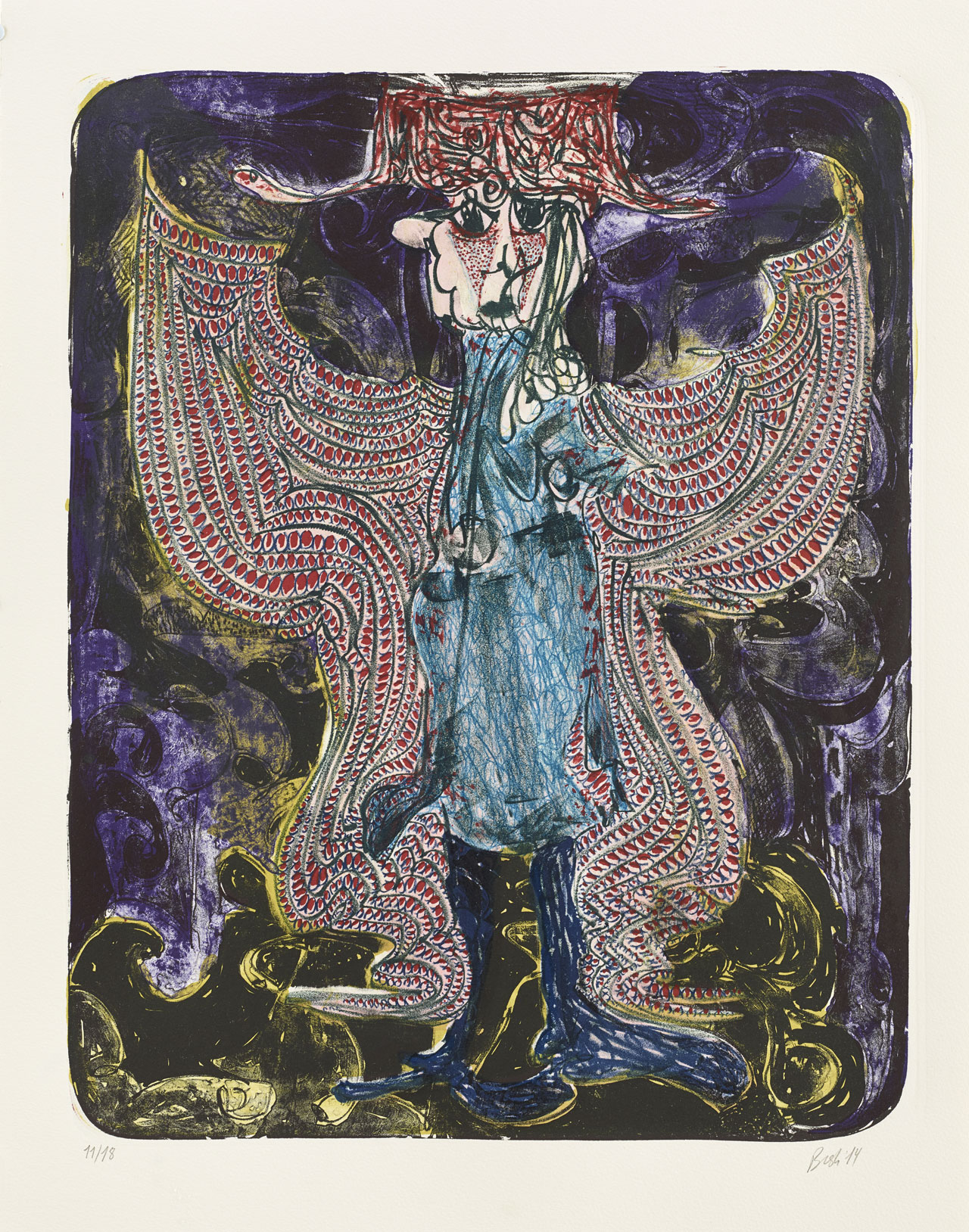 The grotesque creatures in your sculptures and paintings, as well as their titles, seem to reference Mary Shelley’s novel Frankenstein, or, The Modern Prometheus, a milestone in Western literature for its way to represent universal fears through “the monster”. What do these totemic figures of sorts attempt to exorcise?

So what are the functions of these totemic figures… Well, they mock – they mock me, the creator, because they are testament to my limited capabilities as a creator and they mock the spectator because they, though distorted and monstrous are the ones on show, they have the stage now and also, I guess, because they also work as a memento mori, that’s also where the oval shape comes into play, it’s kind of a mirror for the spectator, seeing a face striped to the bones, almost saying, “this is you, we are all going to die, I was in hell and back” (the ceramic heads was fired as you know in a very hot kiln).

They also reference architectural decorative features, like gargoyles, which also leads back to Frankenstein who constantly felt that the monster was observing him, lurking around corners, looking down at him from before, a constant threatening presence. But at the same time they are at peace and generously reach out towards the spectator; Frankenstein’s monster was, as you probably know, a very decent creature filled with love and affection, he was just ‘left behind’ by his creator to the terrors of man’s ignorance – now we come back to The Wire, that always seems to happen for me.

So maybe you could say that these totemic figures, if we can call them that way, are not a representation of the monster in Shelley’s book as it does not illustrate Frankenstein’s monster, but they are alike, they belong to the same realm and share affinities and conflicts as me, the creator shares traits with Frankenstein; but maybe you could say that I did the work that Frankenstein didn’t do or couldn’t do….or at least I tried to, which is the least you can do… I went back to my creation, embraced it, and accepted that what I resented in them was my own ignorance and disrespect for the creation and now we both are somewhat at peace. 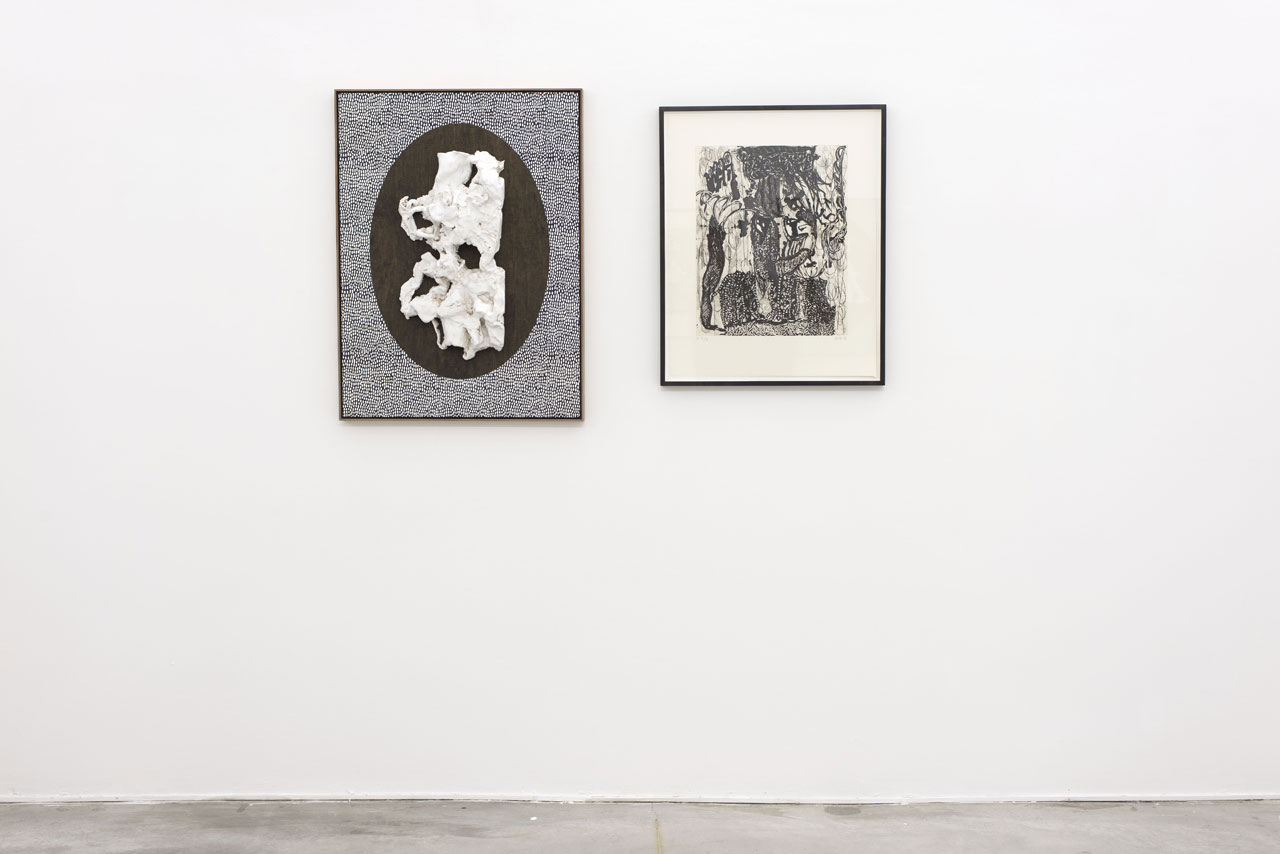