The carnal element of body and its deterioration alongside the way one can physically perceive anxiety are very present in the project Stige as well as in the research of Italian artist Francesco Ardini.

Where’s Art digs into the artist’s background and practice that brought to the recent project “Stige” on view at Federica Schiavo Gallery in Rome. 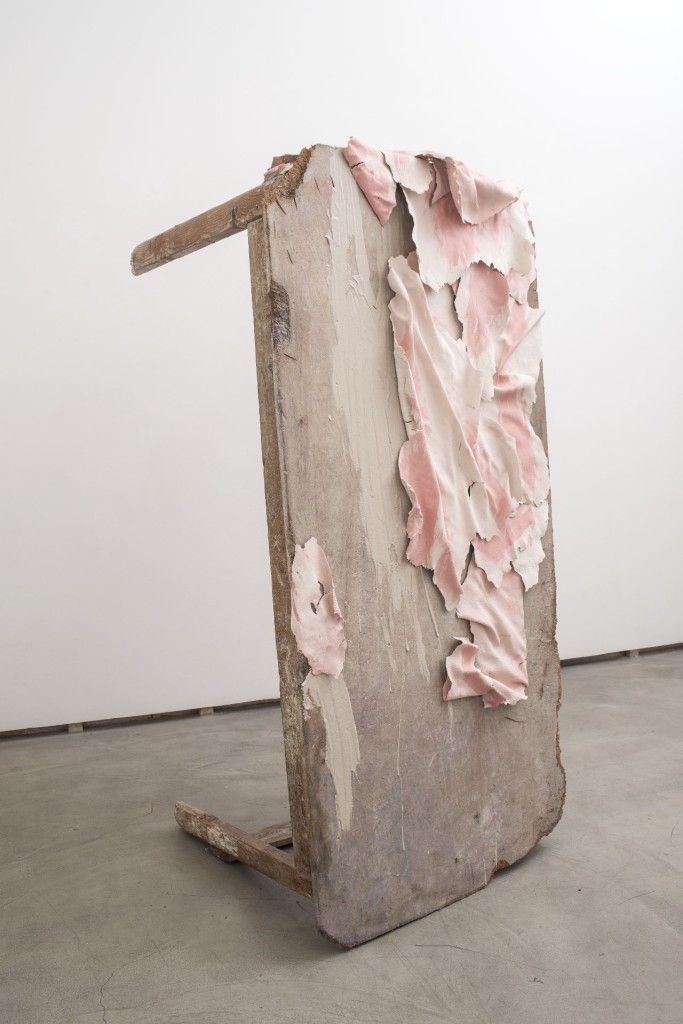 I would like to start this conversation from the title of your show “Stige” (Styx, ed.) – a name that bears numerous references to both Greek mythology and Dante Alighieri’s Divine Comedy. Can you explain what does the reference to one of the rivers of the Underworld mean to you and how this title describes your research?

Since childhood mythology nourished my imagination. To successful stories and all those with a happy ending, I used to prefer the unfortunate heroes, the spoiled gods and the universal dramas so perfectly described by the narratives of the Ancients. But I was a normal kid, perhaps uncommon. And now I am what I was.

Many of my projects depart from mythological references to discuss more personal realities. I like creating images in people’s minds that are immediately linkable to a known myth, then when it is further developed, such image becomes totally distorted. Like the projects Circe (2013) that for me questions the technology that seduces, charms and consumes; Domus Carnea (2013) that mocks the perfect Domus Aurea by turning the stable comfortable concept of “home” to an unlikely fragile place. And now the project Stige (2015) becomes the metaphor for the river Brenta which bathes the lands of Nove, the small town that inspired my work and where I have been working for two years. The area quickly realized the potential of the “god” Brenta, thus drawing energy from the waters of the river through a series of canals and watermills making the place the perfect setting for ceramic manufactories.

However, the river Brenta can no longer be seen as that mythological overflowing figure that gives life and bestows gifts and luck on the city. Man seems to have lost touch with its god river. The factories are empty, the artisans get older. Their eyes shine when they talk about ceramics, but their movements are slow, their hands are bony, and their skin yields to the severity of time. Everything is still and silent. The souls inhabiting Nove live near the shores of the river like the souls of the dead inhabit the infernal Styx in the Inferno’s Seventh Canto of Dante Alighieri’s Divine Comedy:

“A marsh it makes, which has the name of Styx, this tristful brooklet, when it has descended. Down to the foot of the malign gray shores. And I, who stood intent upon beholding, saw people mud-besprent in that lagoon, all of them naked and with angry look..”

This image of a dried dead canal of black mud slowly flowing in a valley of thick mist, appears the harsh metaphor of a country that gets old and becomes stagnant without the capability to renew itself and get out of the deadlock. 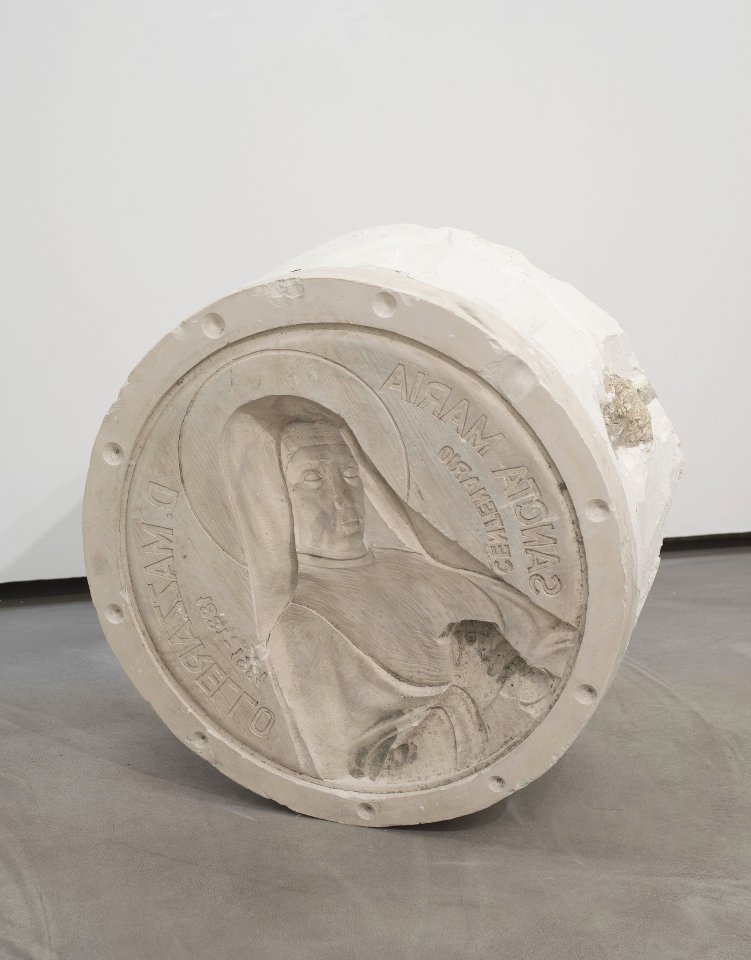 The exhibition “Stige” begins with your series Manufatti Fossili featuring different agglomerations of shapes, styles and epochs, and presenting the statement of your research. Aesthetically speaking, the way these blocks are arranged in the space recalls the plan of archeological sites such as Ostia Antica or Paestum. Is this is your deliberate choice for setting up? Could you tell us more about that?

Trained as an architect, I usually work on the space before going through each work. Indeed, the first room of the exhibition “Stige” at Federica Schiavo Gallery is conceived as an archaeological dig. Strong in my mind is the memory of the excavations I have recently seen in the southern Turkey such as the beautiful ruins around Kas, Fethiye, Pamukkale. And some influences come of course from my education as an architect.

I attempted to recreate this feeling of discovery and of being in an excavation site by using the plaster molds that for decades have shaped ceramic forms distributed throughout the world. Today their are like dead “bodies”, tombstones that are inconvenient to dispose of, and silent testimonies that heavily crush the past of craftsmen of the town of Nove. In fact, they are no longer able to keep alive these places because of the so-called crisis and a lack of renewal.

I have collected many plaster molds from the factories located in the area of Nove, saving them from a certain destruction. Considered cumbersome objects and no longer able to make money – some of these have 100 years of history -, they are destroyed or left piled up in the dust.

Free from their productive function, the plaster molds become new forms in space. Volumes that are created entirely in chalk look like rocks extracted from earth; like fossils of ancient objects emerging from the “stone”, today witnesses of an extinct knowledge and craftsmanship, which tells of love, attention to language and detail of a lost conviviality.

These finds are the treasure of an era that is conceptually distant although chronologically close to us. The negatives of cherubs, animals and vases from different epochs, recovered by cutting the plaster molds with the same technique used to cut the marble, come to light, just as the fossils do, providing the evidence of a knowledge buried in time. 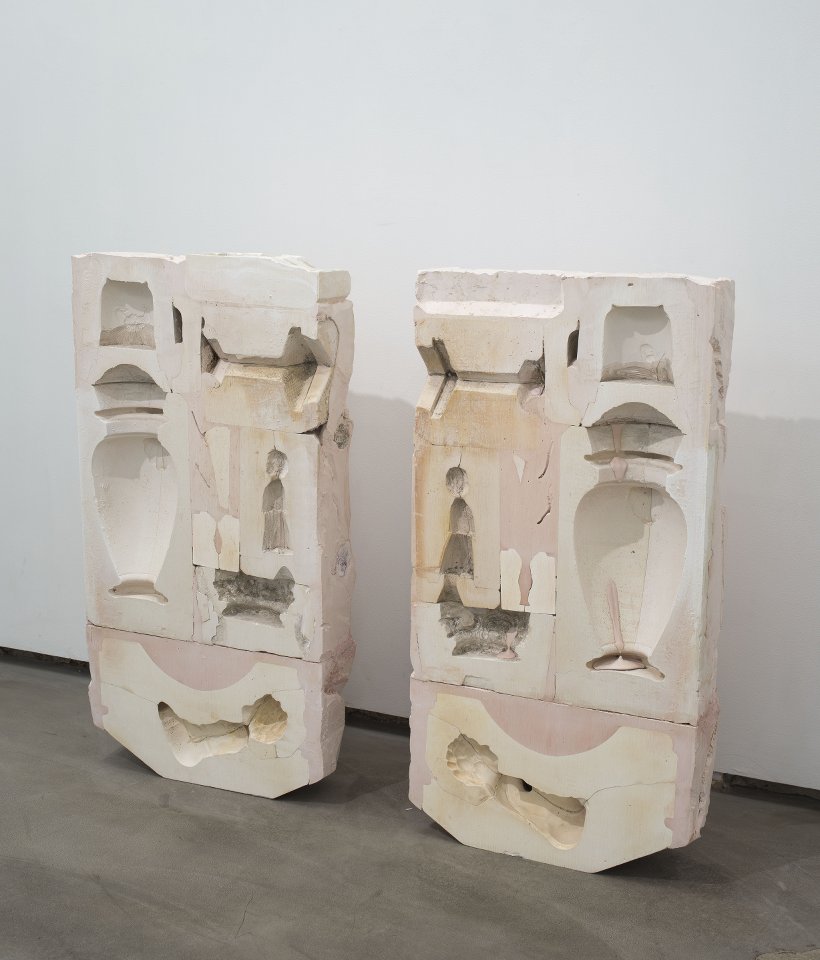 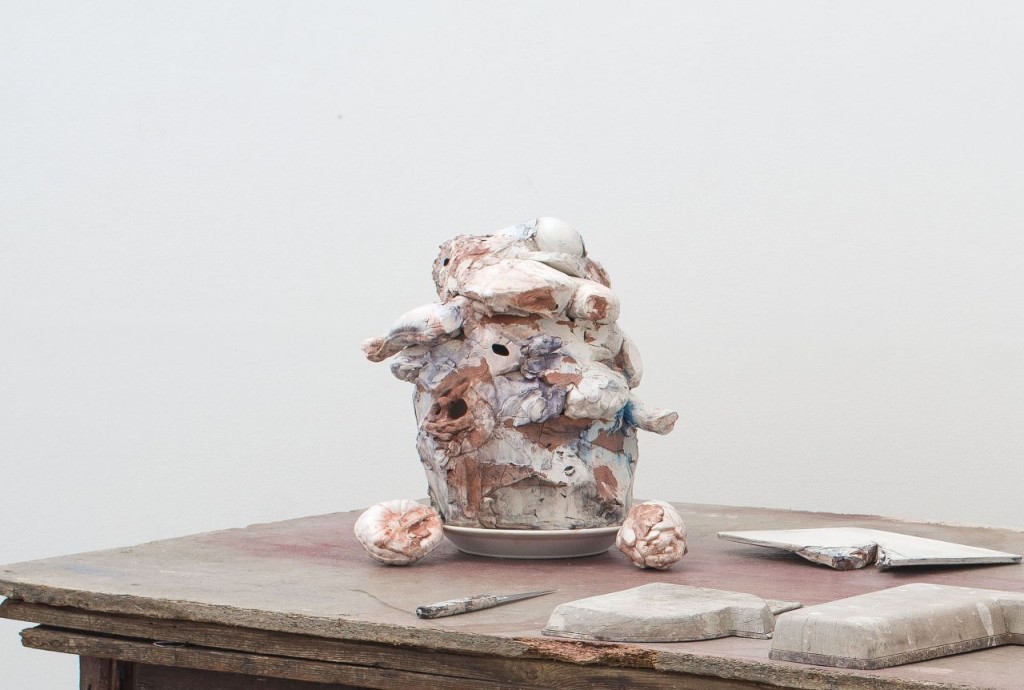 The series Manufatti Fossili (2015), the sculptures Convivio Sacrificio (2014) as well as your works presented at the Taiwan Ceramics Biennale 2014 in Taipei present a taste for the abundance, which is also shared by the language of some artists from South East Asia. What does the element of “proliferation” mean to your research?

I always reflect on my local tradition to produce my work. I am truly convinced that our future roots in our past. The abundance has always been the sign of a typical Mediterranean wealth. Think of the generous ceramic pyramids of fruit alongside the supplies and ornaments for the table as symbols of conviviality and prosperity.

I was born in an era in which production and abundance were thought to balloon, instead I reflect on our collapsing system, in which everything seems to survive in a precarious balance, relentlessly approaching the total disintegration. Society’s bulimia, greed and infinite production that I represent through the pile of dishes and rotten food recall the process of decomposition and reformation that is typical of biological organisms. The anxiety that I describe does not only refer to society as a whole, but stems from a very intimate feeling. 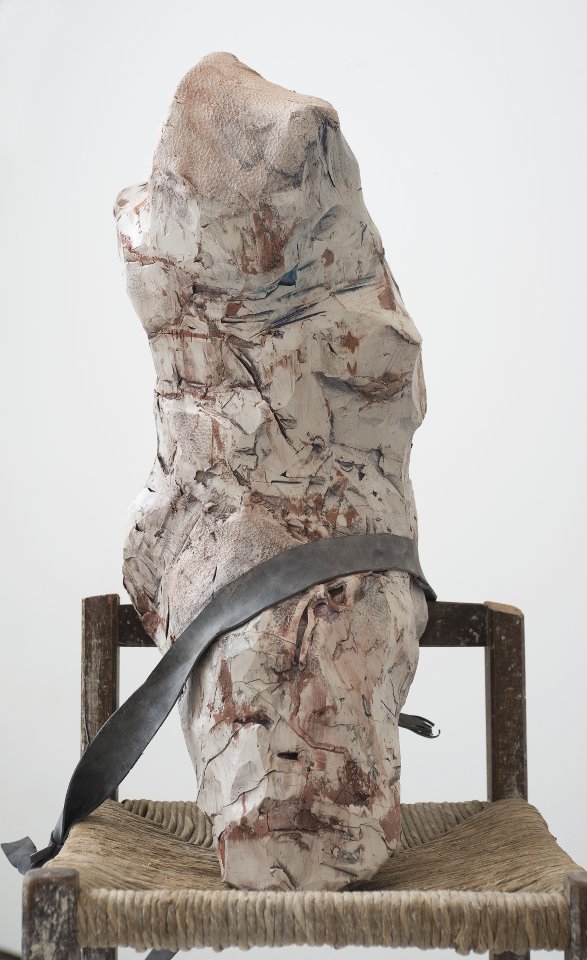 And what brought you to a more minimalist approach in the self-portrait Francesco (2014)?

There is really no minimalist intention behind the work Francesco. I don’t like labels for my projects. I never had a reference, a guide, or a master. I work on myself and on what I feel, with great sincerity and with all the risks that this may entail. Digging inside myself is getting dangerous.

“Stige” works on the anthropological level, but at the same time, the rooms 2 and 3 of the exhibition present a more personal and intimate investigation. That’s the way I work. If you want to get to know Francesco (Ardini), it will be much easier through my works than on a date!

To go back to Francesco (2014), I selected blocks of white earthenware mixed with clay, and I started to cut it sharply with a knife, sculpting the matter with brutal gestures, with no mercy. I made a body out of it. For the ones who are unfamiliar with the process of creation, it is definitely hard to see if that is what remains of a slaughter or rather a new being. The skin somehow emerges and one can feel that the sculpture is somehow a human – the slight twist also witnesses a new primal force. The work is then finished by a colored effect that glides on the surface as if everything was wet and taken away by the inexorable river Styx. Francesco sits on a chair – which has been recovered in an abandoned factory -, he is secured by a black strap used to lock the mold. This body seeks to get the freedom from its home but it is inevitably linked to it. The large pedestal that I have chosen for the exhibition at Federica Schiavo Gallery becomes the room, within which the body lives. 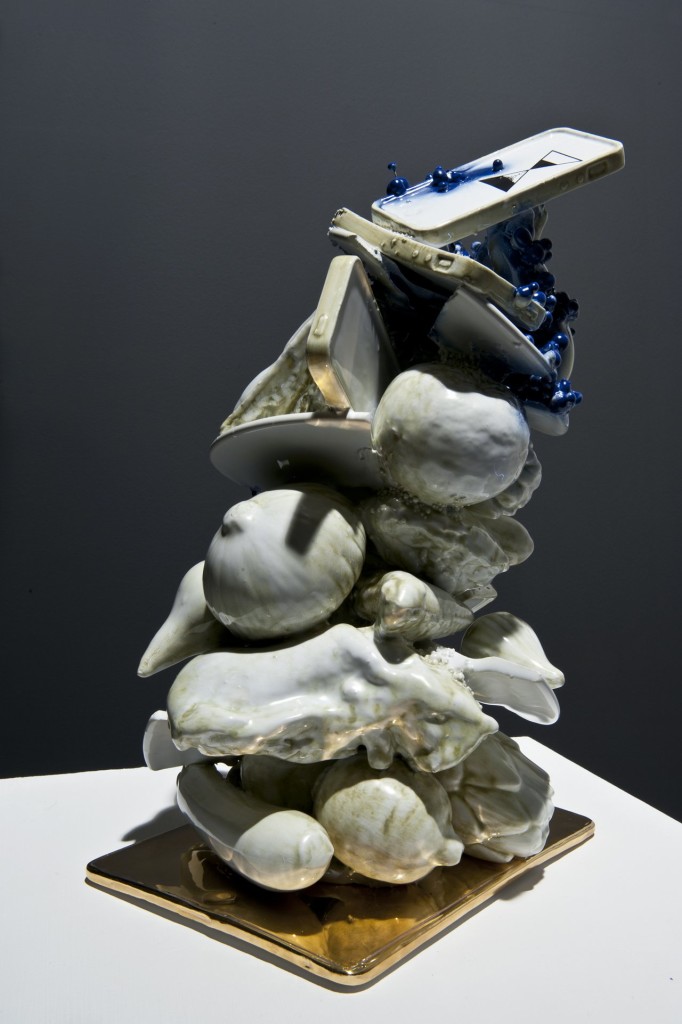 Some of your works like the series Proliferazione and Inviluppo speak through a language that is closer to the world of craft production/ design. Where is in your work the boundary between art and design? And which of the two do you feel better describes your research?

Proliferazione and Inviluppo do not belong to the field of contemporary art, nor they have to do with the world of design, which has to fulfill the specific task with solving problem and creating functional objects reproducible for the community. They were my first personal approach to ceramics, a complex matter that needs time to be tamed and is capable of continually betray one as the most difficult of lovers.

These works belong to the realm of contemporary ceramics, which is one of those artistic fields snubbed in Italy, whereas it is highly considered in Northern Europe as well as, in my experience, in North America and Asia. I departed from the concept of pot and tray, a focal point of the home banquet and therefore a symbol of family. Today the idea of family is going through a severe identity crisis and these objects, once solid, stable and ornate, fall prey to the deterioration and the transformation like organic processes in nature. They speak of change and of a new search for balance in a system that is becoming precarious and fragile. I do not show where we are going, I am rather a witness of my present.

For both the projects, I started from the scientific base. In Proliferazione, I considered the cell and its reproductive process, and represent such dynamics through a simple technique used by mothers to attack small ceramic flowers to artifacts in clay; as for Inviluppo, I had in mind both the polymers with their twisted thread-like appearance and the ancient technique known as “colombino”.

I feel at ease in the world of art, when I destroy the myths that have worriedly accompanied my childhood; when I am honest to myself and to my research – whether the result is a small ceramic work or a large size installation. 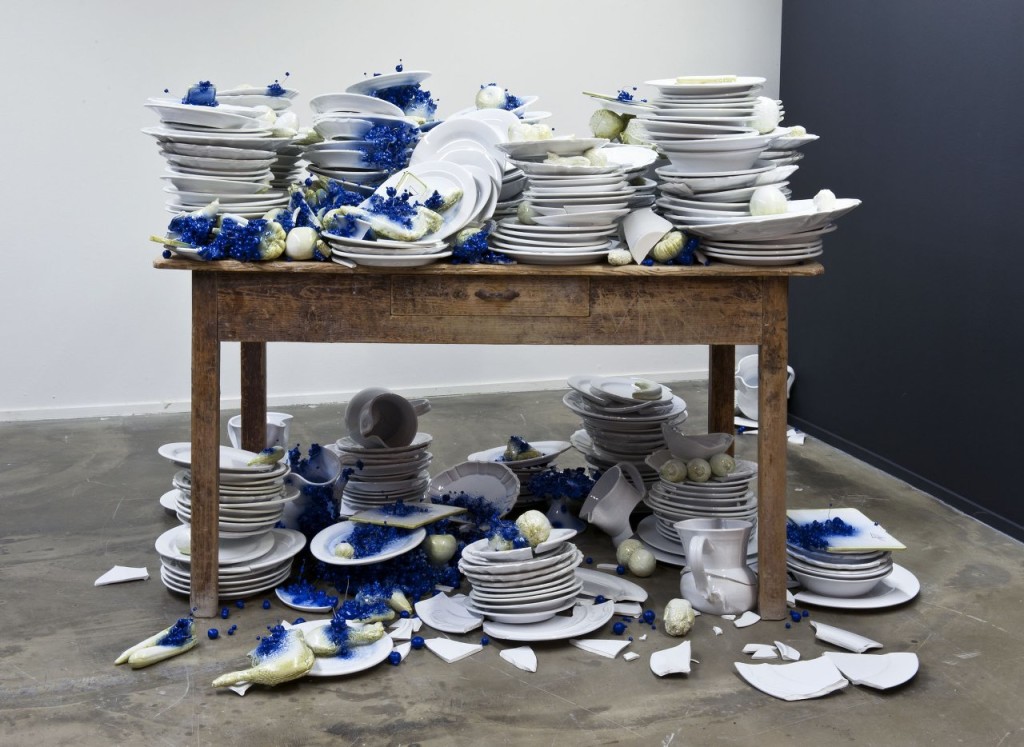