Where’s Art talks to Berlin-based artist Clara Brörmann about painting and aesthetic influences from sculpture and Avantgarde movements in her work alongside her recent solo exhibition “Obenauf” at art dealer Federica Schiavo’s commercial space in Rome. 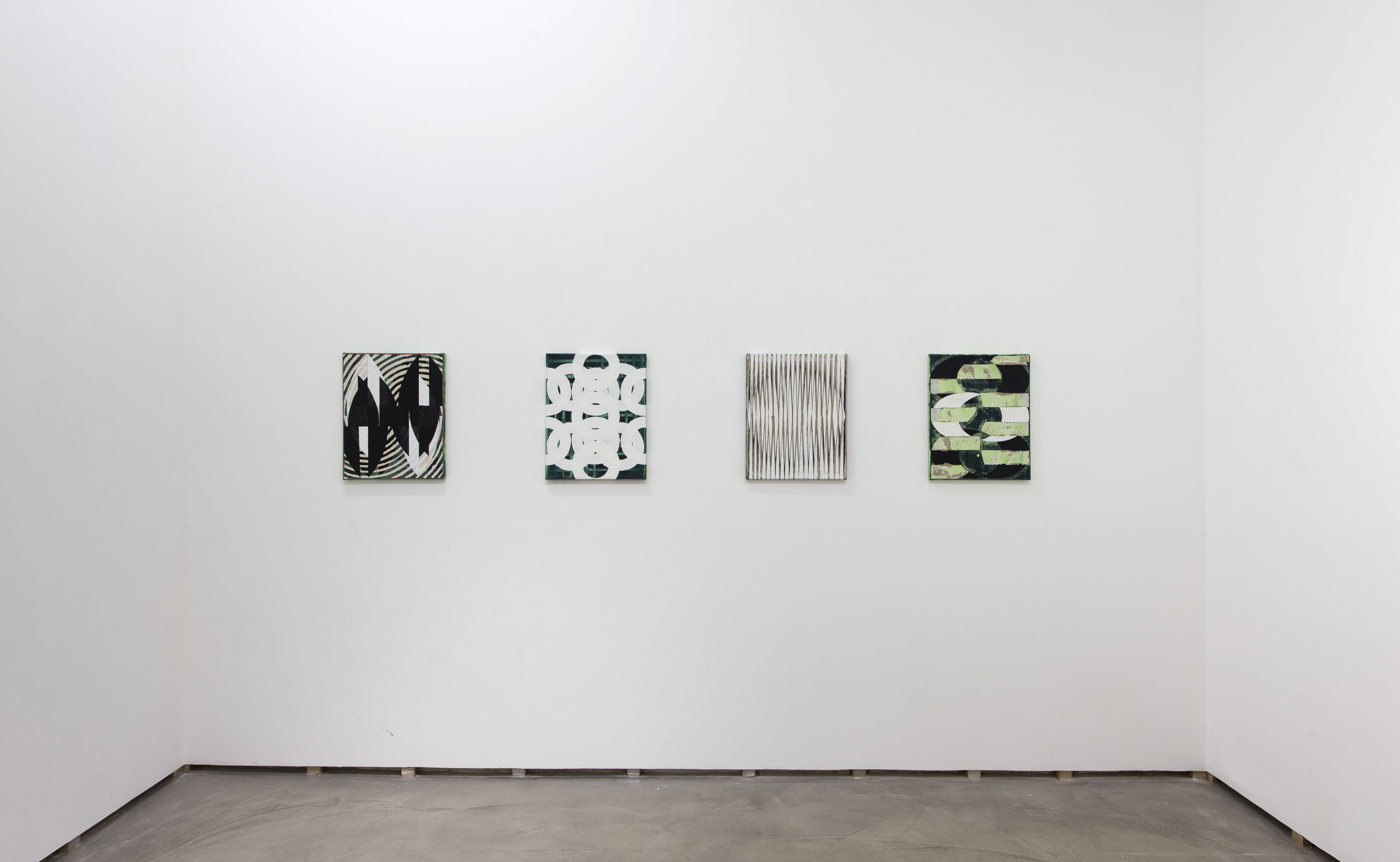 3 adjectives to describe your exhibition at Federica Schiavo Gallery.

Diverse, abstract and colourful. My exhibition is quite different from my previous shows: for Rome, I chose three diverse formats, all of which requested an individual approach. There are a series of small formats inspired by my graphics, two large ones – which were physically very demanding -, and last but not least, the latest titled Kopfbilder, based on an entirely new concept. I am trying to raise questions about complex abstract thoughts, time, or for instance, how vividness comes into a painting. The atmosphere in the exhibition is generally colourful and happy, I would say. I am a rather positive person, and I guess you can feel that in the paintings. They are good company and do not drag you down.

The works in your solo show “Obenauf”, like a performance, are the result of a meticulous schedule of interventions on canvas. How relevant is the process dimension in your work?

Process is very important for my work. In fact, it is the only thing I can rely on. A few times I was asked about how I identify with the Constructivist movement in the beginning of the 20th century. Indeed, the way I organize the elements in the paintings is, as it were, a constructivist method. But I am quite doubtful about completed forms; I want my paintings to be more complex: they should rather trigger questions than give answers. I change and think them over again and again, so that in the end a painting has different faces and aspects depending on the viewer and his/ her perspective. This complexity can only be reached by admitting a long process of creation. 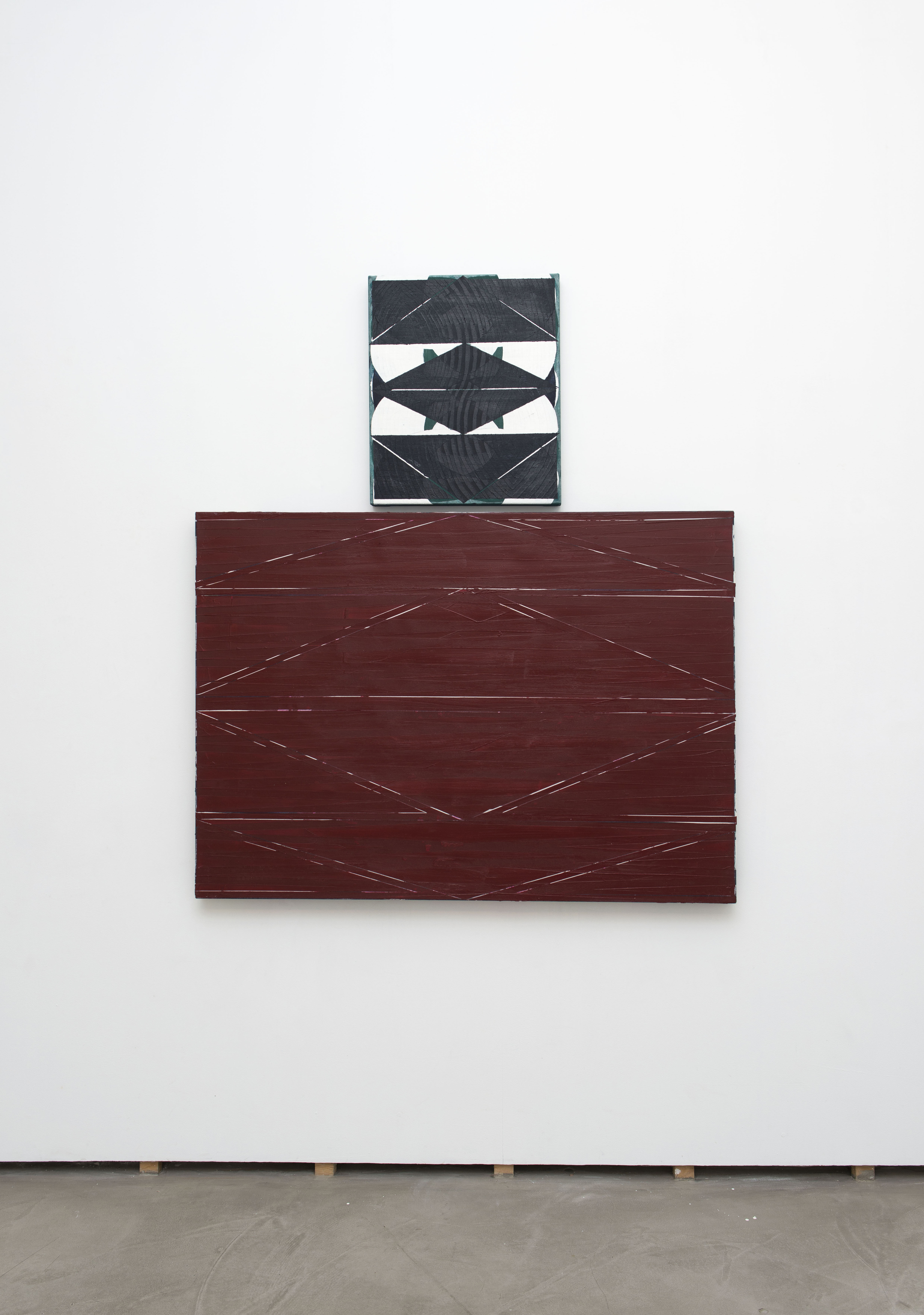 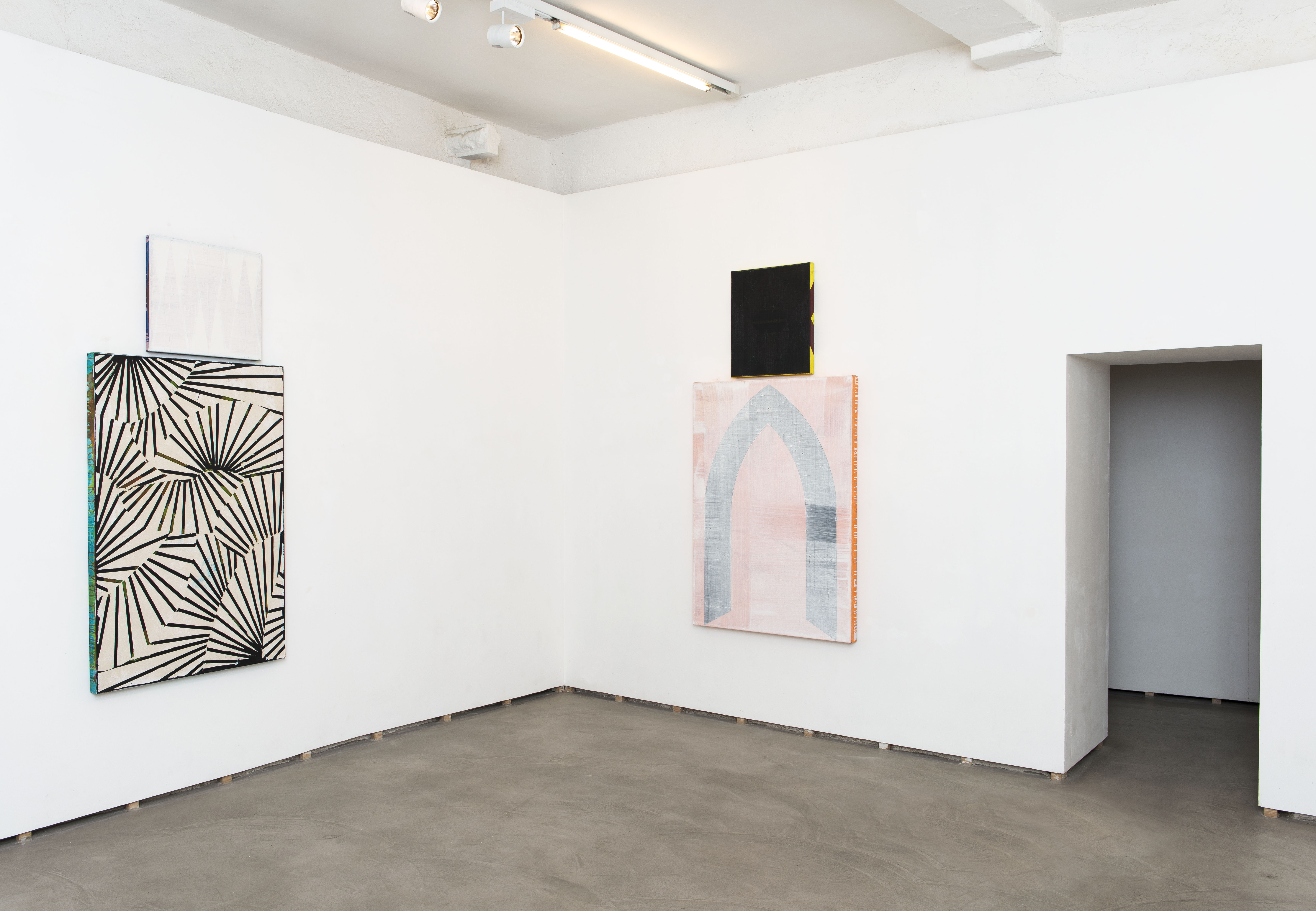 Such an analytical approach, a checklist of sorts, seems to resist the series of improvisations on painted surface; between ‘planning’and ‘instinct’, which of the two attitudes do you think better describes your work? Also, in the series Kopfbilder—which refers to the composition of Medieval altarpieces —is the combination between the two paintings decided beforehand, during the making of the work, or does it come from a later consideration?

Most decisions regarding my paintings are made in the studio, during my work. This also applies to the series Kopfbilder; each Kopfbild consists of a combination of two paintings, a small one on top of a bigger one. It is interesting what happens, when two paintings interact in an uncommon hanging. The German term ‘Kopfbilder’ means ‘head-paintings’ and the obvious association is that the painting has its own head and body.

I cannot say whether instinct or planning dominates – I do a lot of thinking, reflecting and collecting of inspiration outside the studio which is inseparable from my personal life. I need a basic plan for formats and materials, and often I do small sketches for compositions. In the studio the practical work and the materials, colours and canvas come into play, and I try to stay open for coincidences and experiments. So usually, at a certain point, something unexpected happens.
Experience, subconsciousness, coincidence, material and decision-making come together and create new images. These moments are decisive. 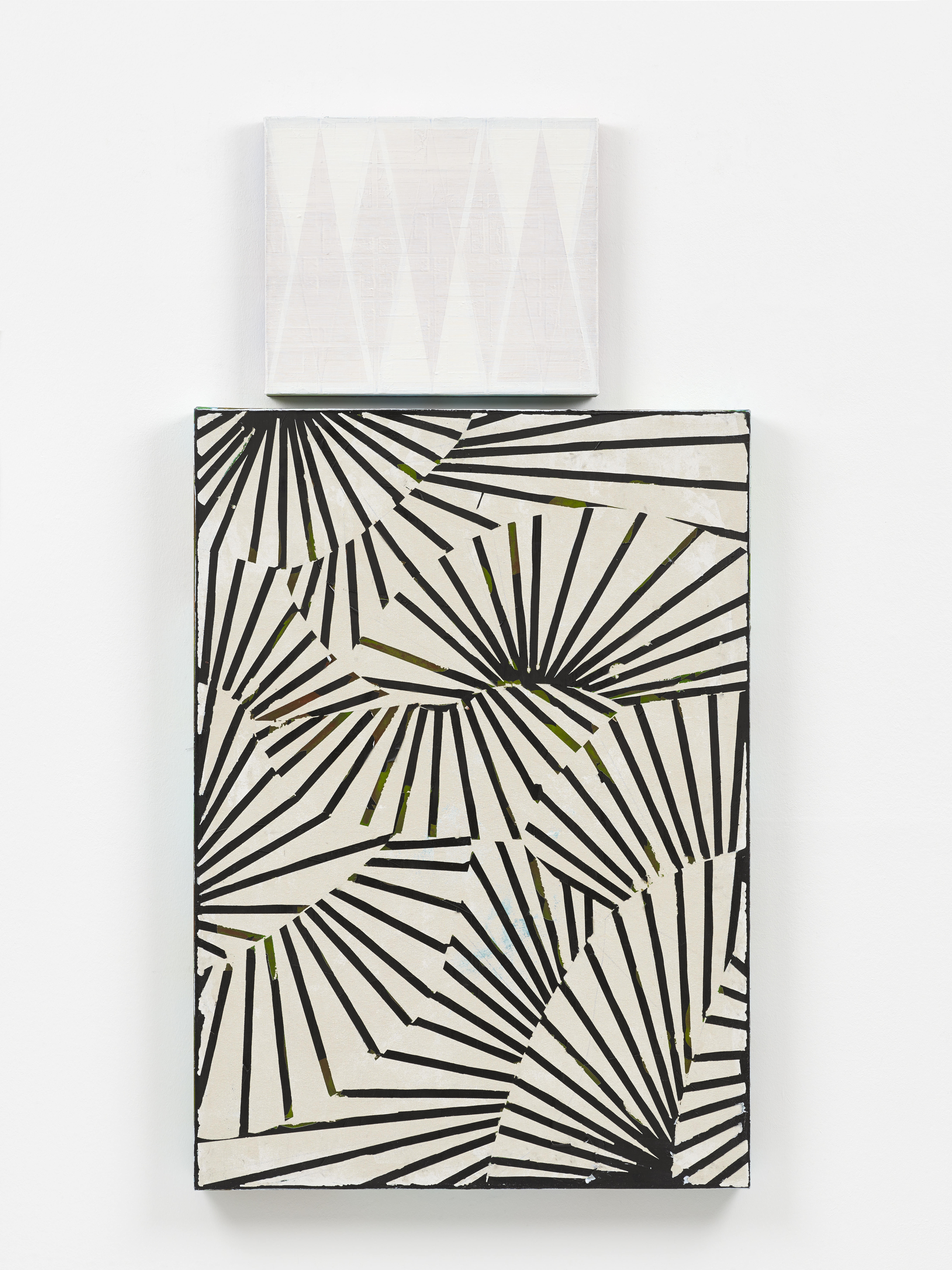 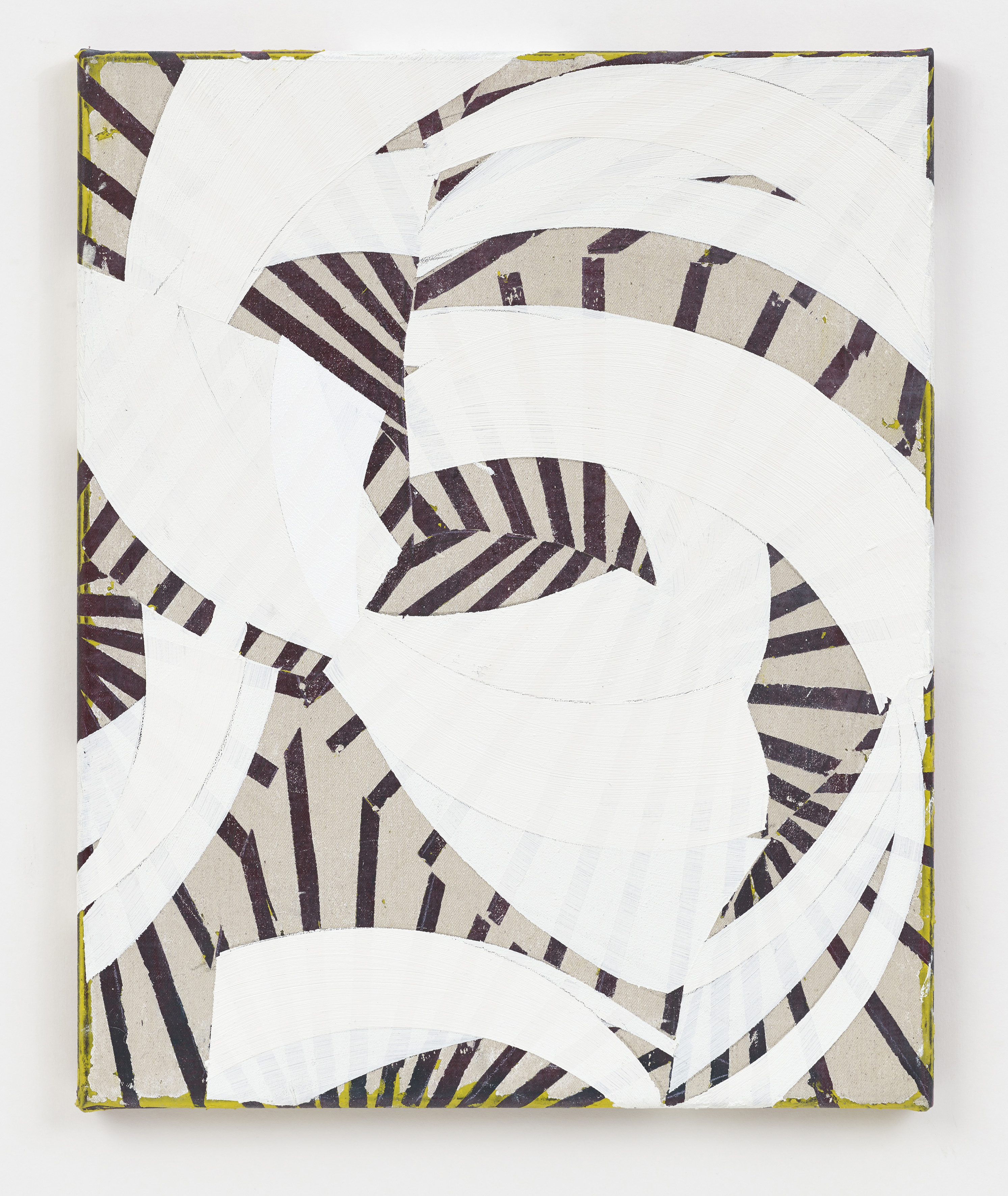 Lines, motives and the whole composition in your canvases seem to present a “reduced to the minimum”reference to patterns by Gunta Stölzl, one of the masters of Bauhaus design textiles. Also, your interest in having canvases in dialogue as well as the consideration for the sides matching main colors and motifs seem to recall this vision of unity encouraged by the Bauhaus. Has your practice been somehow influenced by the concepts of the famous School in Weimar? Would you like to expand on that?

The Bauhaus proclaimed a ‘Lebensgestaltung’ (Life design), which means not only the creation of art in one domain, but also trying to improve living-conditions in general. I am convinced that art is not separate from life but a means of communicating ideas and possibilities we have to actively configure our environment. The Bauhaus concept of unity becomes obvious through the variety of things they were concerned with – furniture, textiles, painting, photography, architecture and so on. I find this approach very important and also very inspiring.

But in your question you were referring to formal aspects – the Bauhaus style tends to spare ornaments and everything redundant. Objects and elements are reduced to their basic form but are kept colourful and beautiful. As for me, I tend to simplify forms,  most of the time there is so much information in the paintings already.

In addition, most of my structures and figurations are bound to the form of the painting. They are self-referring, so to speak, and maybe this reminds of the idea of functionalism? But actually, I cannot speak of a main influence. The Bauhaus has impressed me as much as some painters a hundred of years earlier. At the moment, for example, I am very interested in icons, a much older genre. Above all the main question for me is: what can painting be? 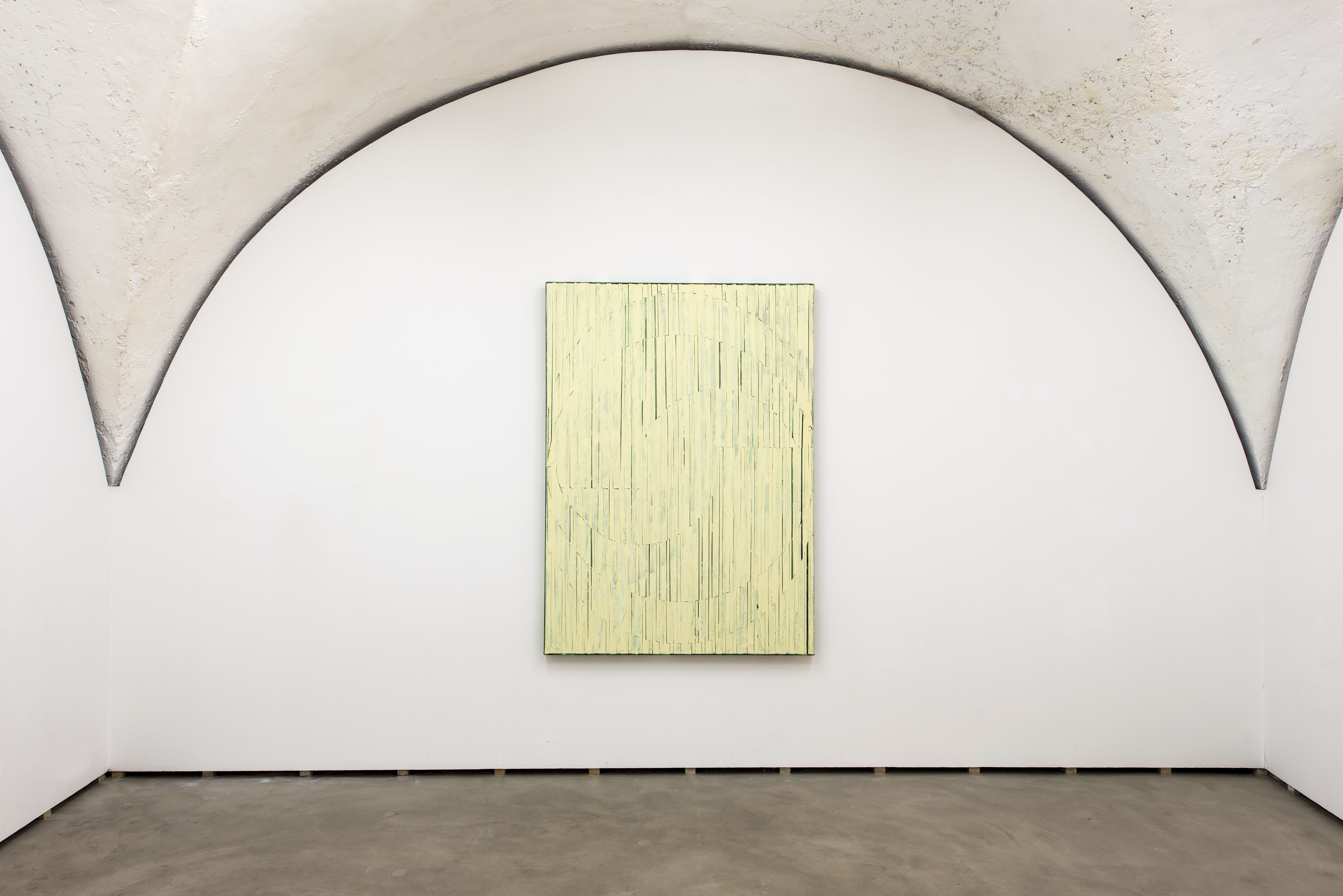 Then, what can painting be?

There is no finite answer to this question. This is why there will never be an end to my involvement with painting. A painting is often loaded with personal projections like memories, hopes and other emotions. They can also be symbols for social ranks or political attitudes, not to forget the monetary value. Also, it can have different forms like an Altar-piece, a childrens’ painting, a wall-painting, a still-life… the list is endless. So in the end, I can only try to work out different solutions. I am, and have always been, very fond of the classical format, the panel painting, but since I started to develop the “Kopfbilder”, I got many more ideas, and I am curious about what will come next.

Your works seem to give room to the unveiled by scratching, defacing, and erasing the surface underneath the top; also, the side parts of the canvas seem to be emphasized, rather than left raw. The way you treat the painting support as a whole, as a three-dimensional object, and the resulting relation to the space seems to reveal an interest in the sculptural painting. What do you think of such an interpretation?

Painting claims a certain space – on the one hand in the room itself, where it is present, on the other hand in the mind of the viewer or the artist. There is a tension between the actual, two-dimensional surface and the multi-dimensional projections on the painting in our minds. I like working with this tension through spatial compositions, the layers of paint, and by treating paintings like objects or sculptures. In fact, the paintings are at least four-dimensional. 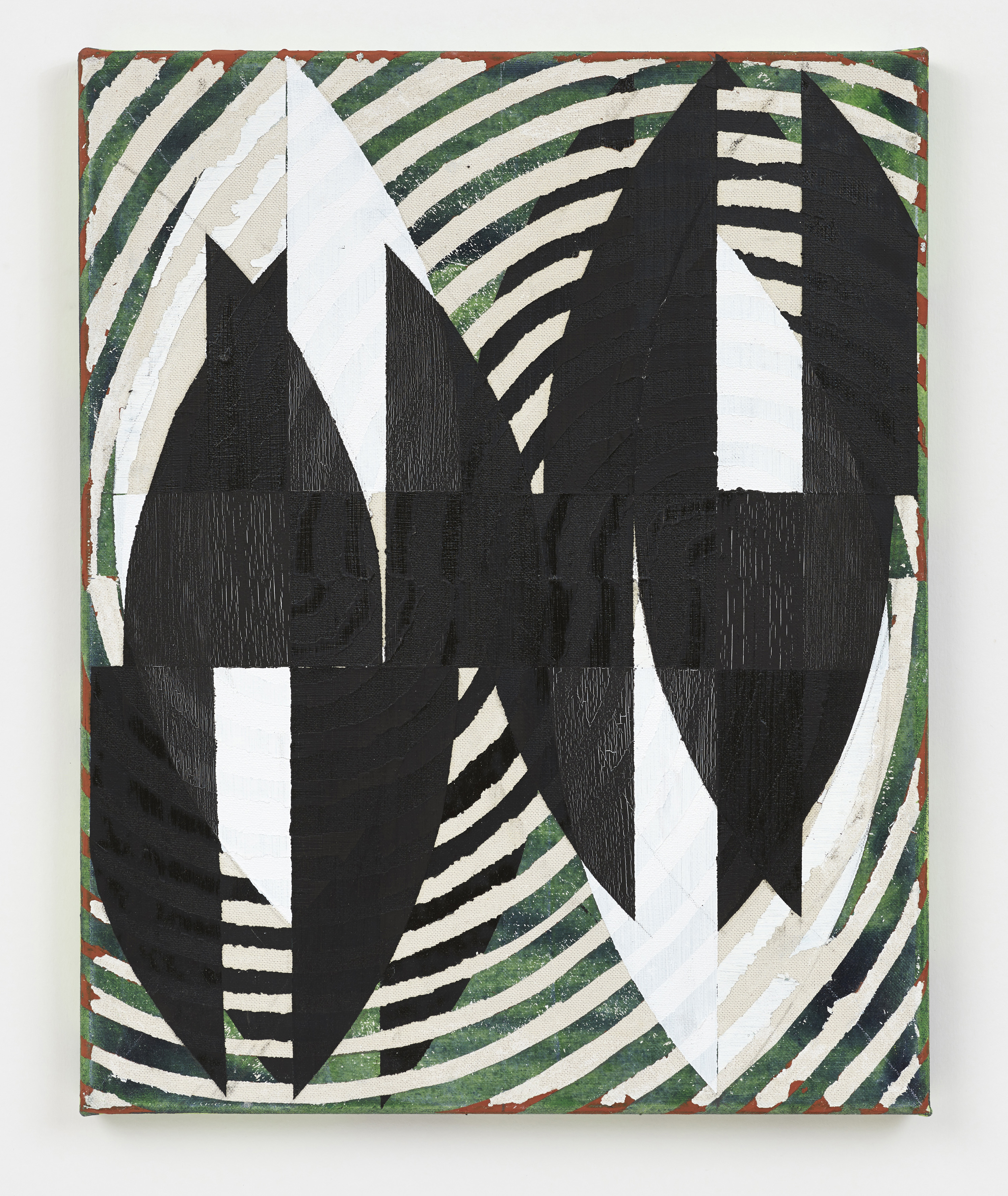