Rome-based artist Stanislao Di Giugno works on the boundary between painting and sculpture. His research revolves around the element of stratification in order for the artist to explore the landscape of images that surrounds him. A schizophrenic melting pot of visual stimuli that Di Giugno embodies in his collages and mixed media canvases.

Where’s Art talks to Stanislao Di Giugno about his creative process and  experimentation on painting. 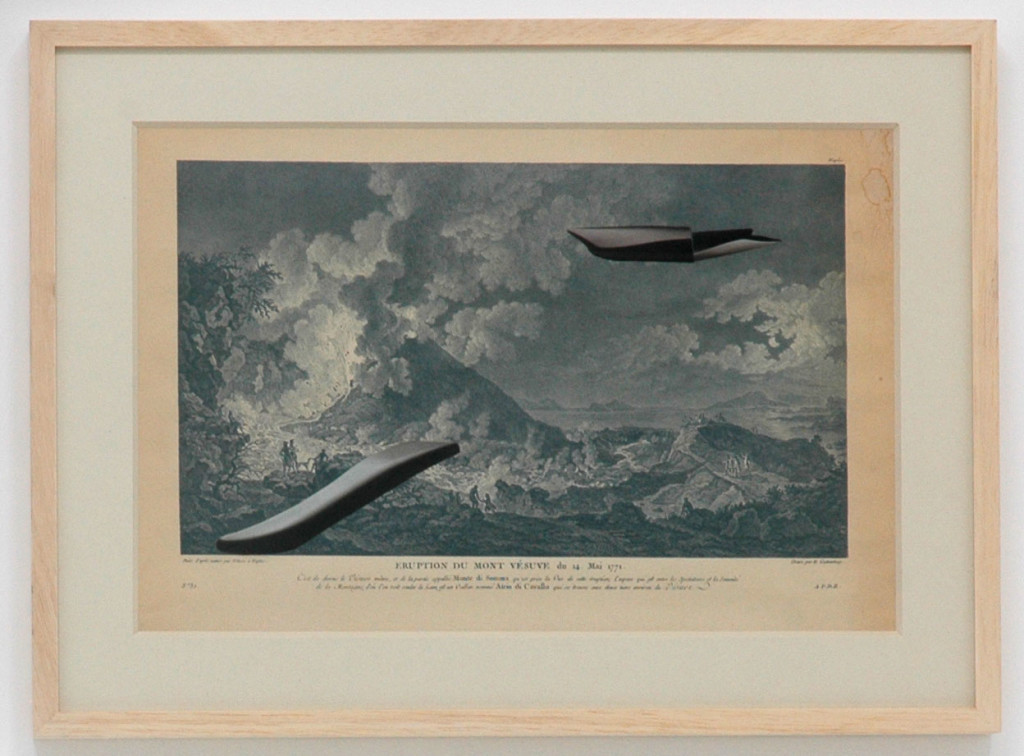 Overlaps, multiple layers, collages of images and materials as well as unexpected detours as in Il Giardino dei Sentieri che si Biforcano (2008), are some of the features of your practice in painting. How would you describe your approach to canvas and what mainly influences this relation?

It is hard to say what influences my work the most. We are living a time we are constantly exposed to images: our gaze is schizophrenically drawn to everything happening around us, we mix and superimpose all the visual inputs we receive, but in the end we see nothing… We live in a sort of hangover from the production of virtual images, what then remains of the reality? We are indeed losing the contact with reality. In this framework, I feel the urgence to return to the physicality, to the matter, therefore to the painting as a field of physical and mental action.
The work you mentioned belongs to a series of collages and is a good example of the kind of approach to the construction of the image I had some years ago. In particular, I literally made the subject abstract by removing the temporal dimension, mixing parts of objects from the magazine with a Nineteenth century etching depicting the Mount Vesuvius and the Bay of Naples. The difference between the two images is pretty obvious and so is the camouflage effect, but I like the composition as it creates an emblematic landscape made up of diverse textures and shapes of objects merging with the natural landscape of the engraving. 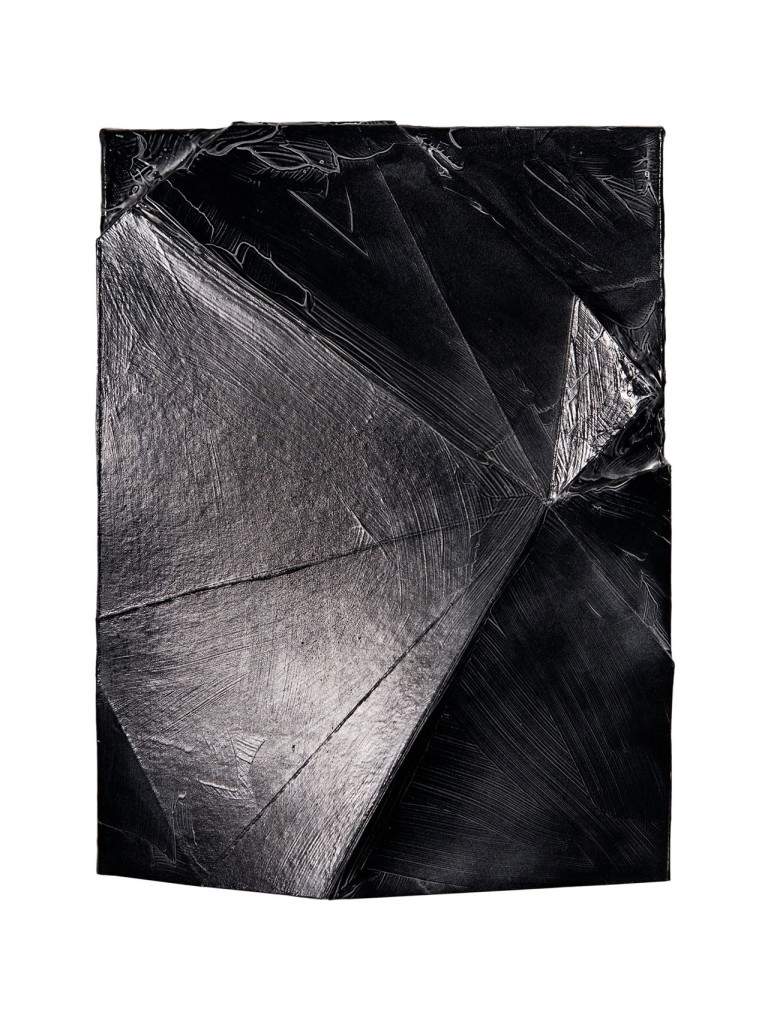 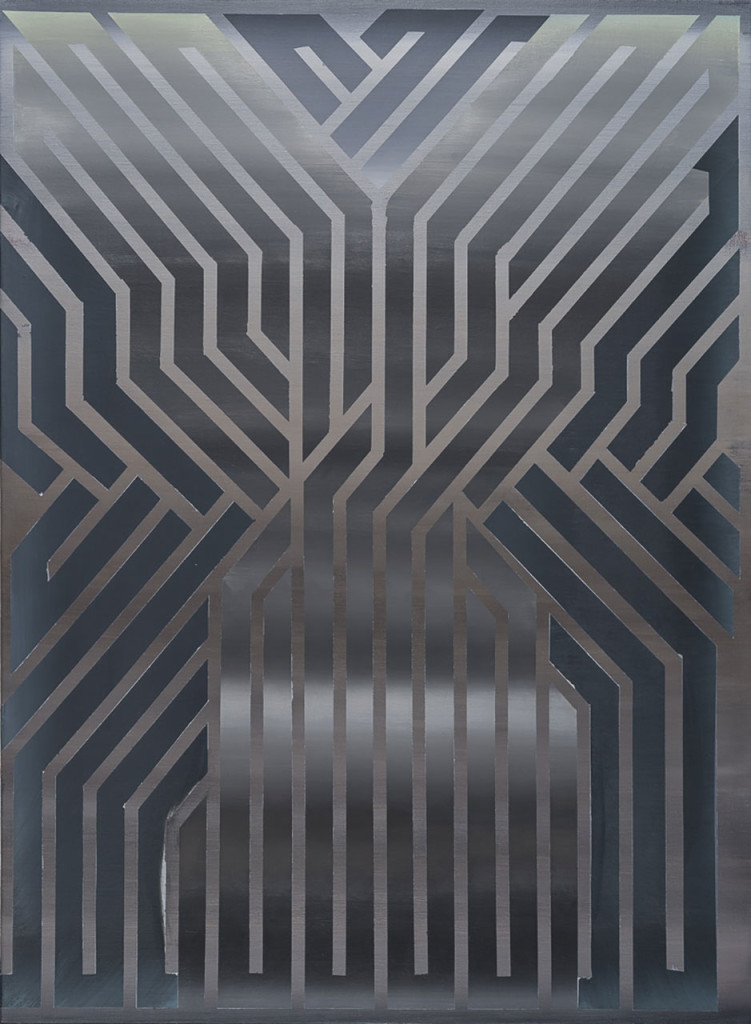 ‘Planning’ or ‘instinct’, what do you think is more relevant to your work?

I can hardly answer. Let’s say that both planning and instinct are very present in my work in many ways. In my latest series of painting nothing is really depicted, there is no a previous idea for the work nor a plan, not even a clear final purpose. On the contrary, the uncertainty and the possibility that the unexpected becomes part of the finished work is really present. I believe painting is an intuitive experience: each of my paintings is a fragment, a possible solution and their final assembly relies on both precision and a process involving actions and moments of waiting and reflection. The result is a superposition of multiple layers, partial achievements and failures combined so as to hide the previous surface or to perfectly match with each other and result in an harmonic unity. 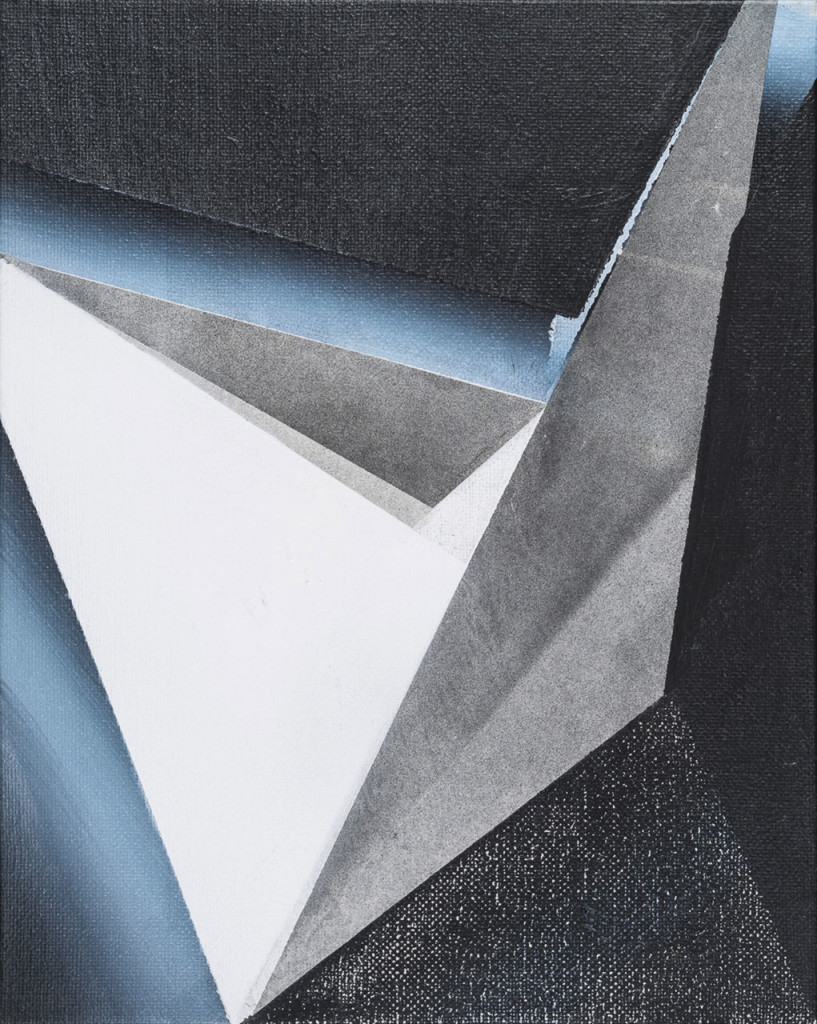 Is there a technique/material you prefer and/or use more often, and why?

I don’t like categorization, but painting is of course what my my research is mainly about. Unlike other languages for which the aspect of planning is very evident in the final formalization, in painting form and content match, or to say it better the content is the painting itself. 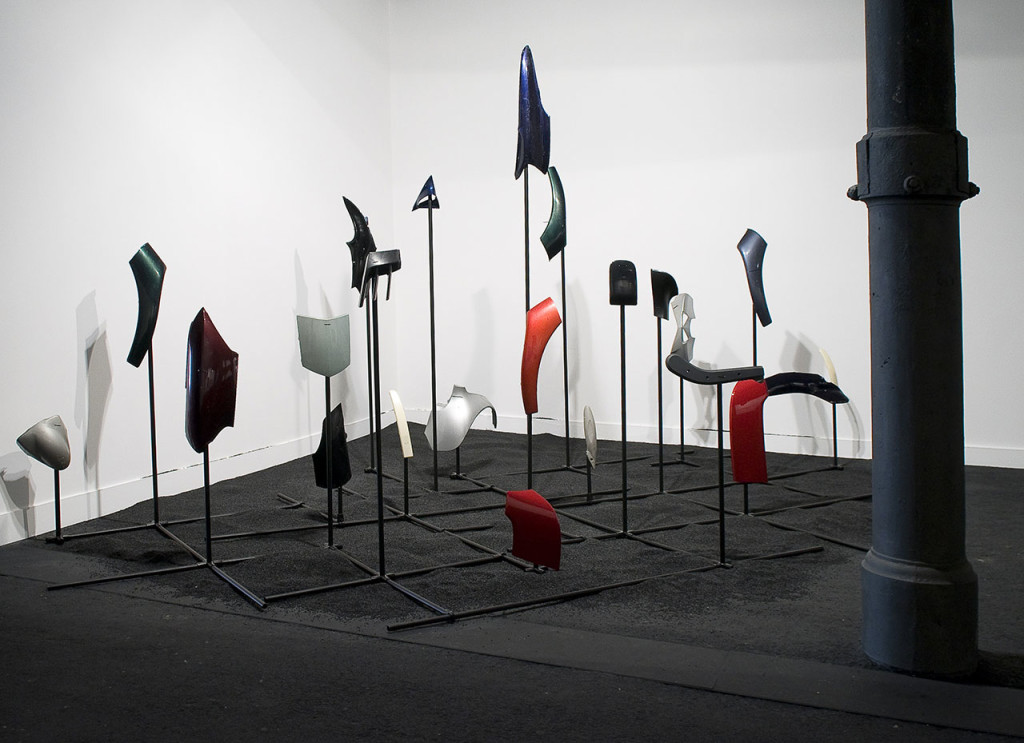 No, I don’t. I see the Western part of the world is becoming more and more an homogeneous one. There are no longer specificities, and living in London, Berlin, Rome or New York can certainly change the quality of life but doesn’t really affect the creative process. Now as then, I do respect artists who have made radical life choices, deciding to live in remote places and away from the hubs of the global art market. Perhaps such a this can really change one’s life, its relation to reality, and then its practice and work. 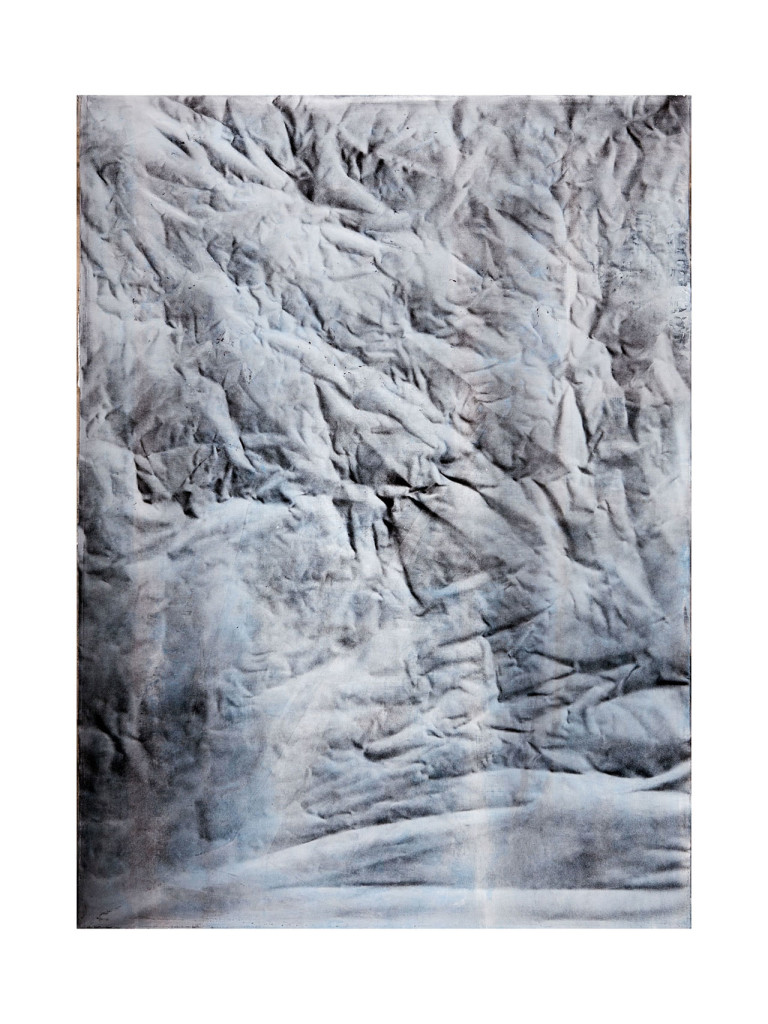 Among your recent works on canvas, the series Pantings for Empty Spaces (2014) is the one that, because of its optical illusions of sorts, seems to approach three-dimensionality. Besides more installative projects such as Una certa distanza (2009) and A Sense of Displacement (2009), are you pushing your research towards the field of sculpture?

This is a trend in painting I have ever had. To me painting is the queen of illusion. You can stay two-dimensional and simulate anything. Perhaps it’s not a coincidence that Optical painters unconsciously start engaging the viewers’ active participation; in a way, they have been the precursors of installation works.

Concerning Paintings for Empty Spaces, this series derives from a number of more mechanical and programmed interventions on canvas such as Frammenti per una Cronologia (Fragments for a history) and Sei Piccoli Fallimenti (Six Small Failures) investigating the creative process with regards to the mechanics of production of the image (even when randomly created) as well as the boundary between two- and three-dimensionality. 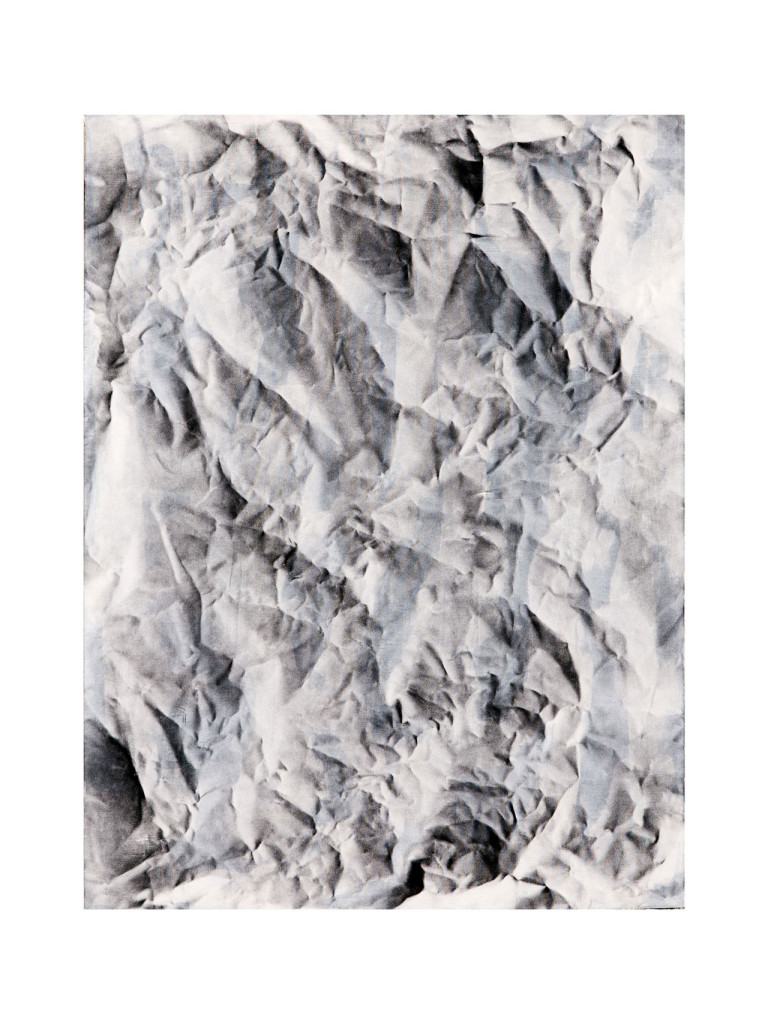 My latest collages – 4  Untitled #5 (2011) – have become physical because of the use of wood, cardboard, and the way I assembly by means of staples. This makes the perception of two-dimensional composition no longer as such, thus suggesting a strong tactile perception. Let’s say these latest paintings (Painting for Empty Spaces) show a very strong sculptural attitude, and have been realized constructing layers on the raw unstretched canvas that has been mounted in the frame at the very end of the process, thus creating this trompe l’oeil effect of three-dimensional space.
These projects feature an engaging internal dynamism in terms of creative process and visual experience, thus stimulating an active exchange between the work and the viewer. What I can tell you is that even if at the very embryonic stage, I am working on projects that start as pictorial ones to find their formalization into the realm of the three-dimensional.